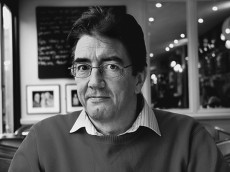 Graham Masterton was born in Edinburgh in 1946. His grandfather was Thomas Thorne Baker, the eminent scientist who invented DayGlo and was the first man to transmit news photographs by wireless. After training as a newspaper reporter, Graham went on to edit the new British men's magazine Mayfair, where he encouraged William Burroughs to develop a series of scientific and philosophical articles which eventually became Burroughs' novel The Wild Boys.

At the age of 24, Graham was appointed executive editor of both Penthouse and Penthouse Forum magazines. At this time he started to write a bestselling series of sex 'how-to' books including How To Drive Your Man Wild In Bed which has sold over three million copies worldwide. He is a regular contributor to Cosmopolitan, Men's Health, Woman, Woman's Own and other magazines.

He lives in Surrey, England (sadly his wife, Wiescka died in April 2011). He has finished writing a black thriller featuring Ireland's only female detective superintendent, Katie Maguire, set in the Cork underworld; and a dark fantasy, Jessica's Angel, about a girl's search for five supposedly-dead children.

The horrific vision of the woman who killed herself with acid will never leave DC Jerry Pardoe’s mind. But soon it will have to make space for worse images.

Reviewed on 30 November 2019 by Kati Barr-Taylor

Widowed Beatrice Scarlet loses her son to Red Indian raiders and returns to England to help at a home for ‘fallen girls’, but finds there are as many savages in 18th century London as in the wilds of colonial America.

Detective Superintendent Katie Maguire and her team are stretched to their limit. Illegal drugs in Cork are at an all-time high. A gang of dog-nappers are terrorising kennel owners. A girl leaves a nightclub – and disappears. Katie realises the three crimes may be connected.

The mummified bodies of a family and their pets found beneath the floorboards of a cottage point to an execution during the Troubles.

Orphaned at 16, Beatrice Scarlet marries a Proestant preacher and emigrates to America. When animals are found slaughtered, with indications of satanism, she suspects a human rather than a supernatural hand.

When a number of elderly nuns are brutally murdered, DS Katie Maguire investigates the convent they served, and finds evidence of criminality on a prodigious scale lasting over decades.

The dismembered bones of 11 women whose skeletons bear the marks of a careful butcher are found on a Cork farm. A young American hitch-hiker goes missing, and Ireland’s first senior female detective, Superintendent Katie Maguire, must solve the ancient murders to find a link to a terrifying modern killer.