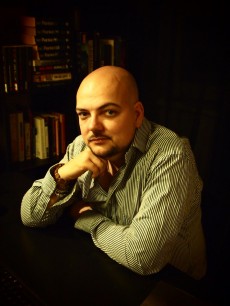 David Mark spent more than 15 years as a journalist before securing a publishing deal with Quercus. His debut crime thriller, the Hull-based Dark Winter, introduced readers to Detective Sergeant Aector McAvoy and has sold more than 150,000 copies, been translated into several languages and optioned by a major TV production company. The follow-up is Original Skin. He lives in Lincolnshire with his partner and two children and is now a full-time novelist.

A single mother running some rooms to let becomes unwittingly involved with local – and not so local – gangsters, shattering her fragile peace in the remote Scottish Highlands.

A single mother on the run, escaping her traumatic past with her son, has found a place as a guard in one of Britain’s northern prisons, where she seems settled at last. But all this is turned on its head by a highly intelligent villain with escape on his mind.

Disgraced academic Cordelia Hemlock is in the graveyard of a village in the shadow of Hadrian’s Wall when a storm brings down a tree which crushes a mausoleum, revealing a fresh corpse among the crumbling bones.

DS Aector McAvoy follows a report that an elderly woman has not been seen for days and finds her frozen in her bath, the start of a trail that reaches far into the past and uncovers a series of grisly murders.

A former Mozambican guerrilla fighter enters England illegally bent on revenge – and DS Aector McAvoy is plunged into a case where present crimes lead him to an enemy from his past.

A Canadian academic, seeking the bones of the apostle Simon the Zealot, hires a discredited and psychologically damaged Afghan war hero as his bodyguard. When a woman who briefly brought peace to the soldier’s troubled mind is murdered, he sets out to bring her vengeance.

DS Aector McAvoy is visiting New York to trace a traveller, his wife’s brother Valentine Teague. Two members of a rival clan, the Heldens, have been shot and unless Valentine is cleared a long-standing feud may be reawakened.

Reviewed on 18 February 2017 by Chris Roberts

One girl is missing, another dead. DS Aector McAvoy of the Humberside Serious and Organised Crime Unit can’t let the memory of either go.

Detective Superintendent Trish Pharaoh is hoping that a power struggle between criminals in north east England will give her the opportunity to take a few down, while DS Aector McAvoy tackles a very cold case.

Reviewed on 12 December 2015 by Chris Roberts

DS Aector McAvoy of the Humberside Serious and Organised Crime Unit finds a mobile phone which leads him to believe a young homosexual’s death, ruled a suicide, may be more. Already in the middle of a drugs war, he must now plunge into a world of sleazy and violent sex to uncover to uncover the truth.