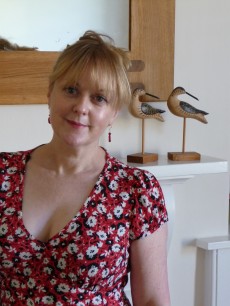 Kate Griffin was born within the sound of Bow bells, making her a true-born Cockney. She has worked as an assistant to an antiques dealer, a journalist for local newspapers and now works for The Society for the Protection of Ancient Buildings.

Kitty Peck and the Music Hall Murders, Kate's first book, won the Stylist/Faber crime writing competition. She has also written The Jade Boy and The Moon Child for children under her maiden name Cate Cain. Kate's maternal family lived in Victorian Limehouse and her grandmother told her many stories of life around the docks. Kate lives in St Albans.

Kitty Peck and the Parliament of Shadows

As Kitty continues her fight against the ‘Barons’ of crime and to dismantle Paradise, her grandmother’s sprawling East End empire, she faces a series of new challenges including a fundamentalist religious sect led by a charismatic preacher.

Kitty Peck and the Daughter of Sorrow

Kitty Peck has inherited Paradise, her grandmother’s sprawling criminal empire in the Thames docklands. But the past casts a long shadow and she must face a criminal cabal intent on her humiliation and destruction.

Kitty Peck and The Child of Ill Fortune

Kitty Peck is the reluctant heiress to Paradise, the criminal East End empire of her grandmother Lady Ginger. She is reunited with her estranged brother in Paris, and is persuaded to take a child back to London – but it is soon clear someone is determined to kill the little boy.

Teenage music hall seamstress Kitty Peck is blackmailed into a career as an aerial artiste but in return for freedom for the brother she thought dead, Kitty must also find out why girls are going missing from the music halls Lady Ginger controls.