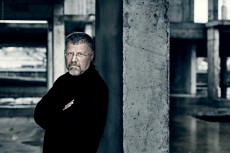 Deon Meyer was born in the South African town of Paarl. After military duty and studying at Potchefstroom University, he worked as a reporter, press liaison, advertising copywriter, creative director, internet strategist and brand consultant before becoming a full-time crime writer in 2009. He lives near Cape Town. His  big passions are motorcycling, music, reading, cooking and rugby.

In a world where the majority of the population has been destroyed by a pandemic, an altruistic academic sets out to build a society free from the pressures of South Africa’s past.