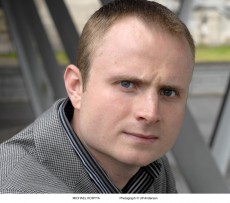 Michael Koryta (pronounced Ko-ree-ta) worked as a private investigator, a newspaper reporter and taught at the Indiana University School of Journalism before turning to writing full-time.
His first novel, Tonight I Said Goodbye, was accepted for publication when he was 20 years old. He wrote his first two published novels before graduating from college and was published in nearly ten languages before he fulfilled the ‘writing requirement’ classes required for his diploma.
Michael and his wife Christine divide their time between Bloomington, Indiana, and Camden, Maine, with a cranky cat named Marlowe, an emotionally disturbed cat named John Pryor (named after the gravestone on which he was found as an abandoned kitten) and a dog of unknown heritage named Lola.

Tara Beckley is lying in a hospital bed, locked inside her own mind. Her sister is fighting for her, but someone else wants her dead, and Tara knows it.

Reviewed on 23 February 2019 by Linda Wilson

The search for his wife’s killer takes Markus Novak back to his roots in Montana where he has to go up against an attempt to cause a severe and disruptive power outage.

Garrison in Southern Indiana is a town that’s harbouring quite a few secrets, as Mark Novak discovers to his cost when he’s sent to look into an exceedingly cold case.

Reviewed on 12 September 2015 by Linda Wilson

Twenty years after the murder of their sister, Adam and Kent Austin once again find themselves the focus of a killer.

Reviewed on 01 November 2013 by Madeleine Marsh