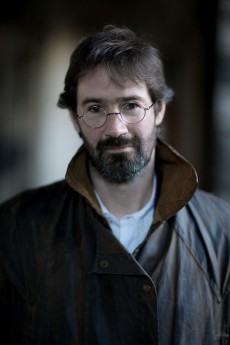 James Oswald is the author of the Inspector McLean novels and the fantasy series The Ballad of Sir Benfro, as well as endless short stories and comic scripts. He has held a bewildering number of jobs down the years, including wine merchant, turkey plucker and experimental sheep shit sampler (not at the same time), all to feed his writing addiction. He currently lives in North East Fife with three dogs, two cats and a very understanding partner. When not tied to his desk by impossible deadlines, he runs a 350-acre livestock farm, where he raises pedigree Highland cattle and New Zealand Romney sheep.

With a new drug stalking the streets, his girlfriend in a coma, and a series of dead bodies being dug up in inconvenient places, the last thing DI Tony McLean wants to do is pander to his boss’ whims especially when those whims involve his old foe, the sinister Mrs Saifre.

DC Con Fairchild is on compassionate leave, holed up in a remote cottage on the Welsh coast, but that doesn’t stop her getting drawn back into her old job when she tries to help a young woman she suspects of having been trafficked into drug-running and prostitution.

Reviewed on 19 February 2022 by Linda Wilson

Former DCI Tony McLean has been busted back down to DI, but he’s still the go-to guy when something odd happens in Edinburgh, and this time it’s an old woman beaten to death and then burned in her remote cottage. And that’s only the start of things …

DCI Tony McLean must cope with a missing member of staff, a multi-agency operation with a silly name and bodies galore.

DC Constance Fairchild is suspended on full pay with orders to keep a low profile. But that’s not something that Con excels at, especially when she finds a horrifically injured man almost on her doorstep.

Cold as the Grave

When the desiccated body of a child is found in an Edinburgh basement, it’s immediately believed to be a cold case, but when that’s proved to be incorrect, life gets complicated for DCI Tony McLean.

Reviewed on 09 February 2019 by Linda Wilson

No Time To Cry

DC Constance Fairchild’s undercover operation ends abruptly when she finds the dead body of her boss who’s been tortured and shot in the head. Constance is determined to find his killers.

Reviewed on 24 November 2018 by Linda Wilson

A tanker carrying a toxic load crashes into a bus stop in Edinburgh. DI Tony McLean is one of the first on the scene and must unravel the tangled truth behind the carnage.

Reviewed on 03 February 2018 by Linda Wilson

DI Tony McLean is given the unenviable job of discovering why a former bent copper has ended up impaled on top of a tree in an Edinburgh park.

A vice raid goes spectacularly wrong. But Inspector Tony McLean has never been one to stop digging, no matter how deep the hole gets.

Prayer for the Dead

DI Tony McLean struggles to find a link between a series of bizarre killings in Edinburgh.

DI Tony McLean’s superiors are keen to tidy away the case of a prominent Scottish MP who murdered his wife and two daughters before killing himself, but McLean wants to get the bottom of what drove the man to murder and suicide.

Edinburgh is suffering a spate of suicides, all by hanging, all seemingly unconnected. Acting Superintendent Duguid wants them all wrapped up nice and tidily and, more importantly, quickly, but DI McLean doesn’t agree. He thinks there’s more to the deaths than meets the eye.

A series of high-profile murders in Edinburgh need to be investigated, but DI Tony McLean is obsessed with an older death, the brutal killing of a young woman entombed in the cellar of an old house, unearthed during building works.

Reviewed on 08 February 2014 by Linda Wilson