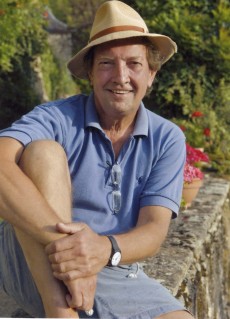 Martin Walker spent 25 years working at The Guardian newspaper in a variety of positions including bureau chief in Moscow and the United States, European editor and assistant editor. He is now the senior director of the Global Business Policy Council. He is also a contributing editor of the Los Angeles Times's Opinion section and of Europe magazine. Walker also is a regular commentator on CNN, Inside Washington. Amongst other things, he is the author of  the 'Bruno' detective series set in the Périgord region of France, where he has a holiday home.

To Kill a Troubadour

Extremist Spanish nationalists threaten to spoil the summer peace of St Denis’ annual music concert. Bruno, Chief of Police, faces a race against the clock to outwit them.

With the ever-present danger of forest fires adding to his workload, Bruno, Chief of Police, still finds time to help investigate a cold case that has haunted his friend J-J throughout his career.

A Shooting at Chateau Rock

Police officer Bruno cooks mouth-watering meals for his friends in between investigating crooked dealings behind a dead farmer’s estate and Russian influence in the Dordogne.

The Body in the Castle Well

When the body of a rich and well-connected American art student is found down a well in the grounds of a castle, Bruno, Chief of Police, must work out whether she fell or was pushed.

A Taste for Vengeance

Bruno Courrèges, Chief of Police in St Denis, has been promoted and now must deal with a far wider area. His first case in his new role is a possible murder-suicide with links to a terrorist organisation.

When the body of an unknown woman is found at the base of the walls of a ruined castle, Bruno, Chief of Police, is called to investigate.

Village police chief Bruno is on the trail of a missing wartime racing car, as well as investigating who killed a researcher.

Chief of Police Bruno Courrèges is caught in the middle of a row between hunters and conservationists in the Dordogne town of St Denis, as well as having a suspicious death to investigate.

Inspector Bruno Courrèges has to juggle an investigation into the brutal death of an undercover French cop with the clandestine return to France of Sami, a young Muslim man who appears to have been involved in terrorist activities in Afghanistan.

Against a backdrop of rural France, Inspector Bruno Courrèges, Chef de Police in St Denis, has to deal with a series of burglaries that culminates in a vicious murder.

Reviewed on 16 November 2013 by Linda Wilson