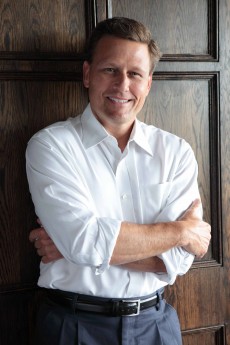 David Baldacci has been writing since childhood, when his mother gave him a lined notebook in which to write down his stories. Much later, when David thanked her for being the spark that ignited his writing career, she revealed that she’d given him the notebook to keep him quiet, because “every mom needs a break now and then.”

David published his first novel, Absolute Power, in 1996. A feature film followed, with Clint Eastwood as its director and star. David has so far published 34 novels for adults and six novels for younger readers.

A lifelong Virginian, David received his Bachelor’s degree from Virginia Commonwealth University and his law degree from the University of Virginia School of Law, after which he practised law in Washington DC.

In addition to being a prolific writer, David’s efforts are dedicated to his family’s Wish You Well Foundation. It was established by David and his wife, Michelle, and supports family and adult literacy in the United States by fostering and promoting the development and expansion of literacy and educational programs.

Aloysius Archer is discharged from prison in 1949 to the southern US town of Poca. He is offered work by a local businessman, collecting on a debt, but the job turns out to have complications.

Reviewed on 31 January 2020 by Chris Roberts