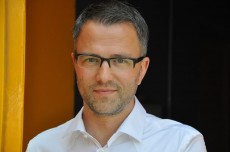 Thomas Enger was born in Oslo, Norway. He spent his childhood playing football and dreamed of becoming a professional footballer at Manchester United. But he never made it further than Ull/Kisa (a club at the third highest level in Norway). He does have one hell of a passing foot, though.

His first paid job, besides the odd summer job cutting a neighbour’s lawn (not a lucrative or a particularly smart job, since he’s allergic to grass…) was as a garbage disposer at Oslo Lufthavn Gardermoen (the airport). The summer job at OSL didn’t last more than a few weeks, either, and then Thomas moved on to bigger things – working in a kiosk at a shopping mall in Lorenskog just outside Oslo. He wore a nice shirt and all.

Then he went into the military for nine months, got to fire a rifle at least three times, but mostly spent his days in an office listening to Metallica. He did get to wear a nice-looking uniform, though.

After Thomas’s soldiering days he went to Oslo to study sports. Then he spent a year working as a sports teacher in Jessheim, where he grew up. He then got to go to Stavanger and learn the basics of journalism. Oslo was again his next destination – Nettavisen became Thomas’s first real employer. He worked there from 2000 to the summer of 2008, the last five years as a sports chief editor.

But what he really wanted to do was to write fiction. After having tried for 15 years (yes, he’s a resilient bastard), he finally succeeded. His first novel Burned (originally titled Skinndød) was published in February 2010.

Thomas lives in Oslo with his wife and two kids. And he likes to play golf. He’s still trying to figure out how that little bastard of a ball operates. Or maybe he’s just finding new ways to cut the grass.

When a bomb rips through the centre of Oslo as the clock strikes in a New Year, police officer Alexander Blix and journalist Emma Ramm are both at the scene. And so begins a new investigation and a ten-year-old mystery to solve for this unlikely partnership ...