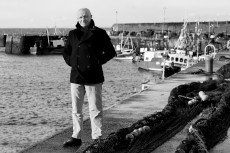 Peter Ritchie is a retired senior police officer, and the author of the Grace Macallan crime fiction series. He grew up in the fishing communities of Musselburgh and Port Seton, East Lothian.

After eight years as a deep-sea fisherman, Peter joined the police service, working in CID, Murder, Serious Crime and Regional Crime Squads, NCIS London and Europol in The Hague.  In his final year he worked on a project in Croatia. His time in the service included investigating the Robert Black murders, at a time when it is now known three serial killers were operating in Scotland.

Following retirement Peter worked on a number of private investigations and a public inquiry in Northern Ireland.

He has occasionally appeared on BBC Radio Scotland, including interviewing other crime writers with his friend and former senior police officer Tom Wood. Guests have included Ian Rankin and Denise Mina (although they have not arrested either).

Peter lives in Musselburgh. He writes poetry, enjoys painting and volunteers at St Columba’s Hospice and a writing group organised by the Bethany.

The ambitious and hard-bitten DI Janet Hadden seeks help from a gang boss to boost her own career. But in a fast-changing underworld there’s always a price to pay.

Formerly a criminal investigator, Superintendent Grace Macallan is desk bound and, unable to stand it any longer, requests a transfer. It so happens that a notorious Glasgow gang member has apparently committed suicide whilst in prison. Grace is given the task of investigating the suicide and compiling a report.

DCI Grace Macallan and the newly-formed Lothian and Borders Major Crime Team must track down whoever is brutally attacking and now killing prostitutes.