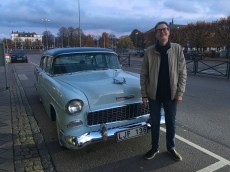 Andrew Cartmel was born in London and grew up in Canada where, among other things, he learned the meaning of the words “wind chill factor.”  Ever since he first learned to read (Ray Bradbury, Robert Heinlein, the Oz books), Andrew never wanted to be anything except a writer. On returning to London to study at university, his game plan was to support himself writing scripts for television while getting established as a novelist. This led him into a detour — and down a rabbit hole — which included a distinguished sojourn script-editing Doctor Who for three years (google “Cartmel masterplan”).

At the same time, very much under the influence of Alan Moore, Andrew began writing for comics, first the Doctor Who strip and then Judge Dredd and, most recently, collaborating on the Rivers of London series of graphic novels with their creator Ben Aaronovitch — an old comrade in arms from his television days.

Andrew is also a passionate playwright, with several runs of his work already produced on the London fringe, and many more to come when the theatres eventually reopen. He also had a brief but memorable career as a stand-up comedian, where he learned that being heckled is far from the worst thing that can happen to you. Andrew Cartmel lives in London with too many books, too many records and just enough cats.

Reviewed on 19 December 2020 by Linda Wilson

The death of an old friend takes both Nightingale and Peter Grant on a trip down memory lane.

Reviewed on 22 February 2020 by Linda Wilson

Drug dealing on the River Thames takes on an added dimension when a pair of river goddesses get involved.

Reviewed on 23 February 2019 by Linda Wilson

A boxed set of three graphic novels in the Rivers of London series featuring PC Peter Grant and the ‘weird shit’ that keeps him in a job.

Reviewed on 08 December 2018 by Linda Wilson