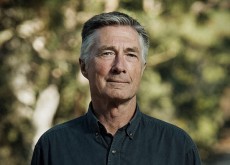 Garry Disher grew up on a wheat and wool farm in the outback South Australia region, and although he’s not lived there since he was 18, when he left to study at university, the place continues to exert a pull on his imagination and features in several of his crime, general and children’s novels.

A full-time writer for most of his professional life, he now lives along a dirt road a few minutes from the sea on the Mornington Peninsula, south-east of Melbourne, and when he’s not writing he likes to jar his bones on a ride-on lawnmower, read, walk on the nearest beach, hold curry nights or visit his student daughter in Melbourne.

Otherwise solitary by nature, he was not overly troubled by the enforced social isolation of the Covid-19 lockdowns but certainly came to value being able to use a telephone and Zoom.

He has a great fondness for the UK, having visited several times, including a year in London after university graduation and three months in Newcastle, where he was writer-in-residence at the University of Northumbria.

Constable Paul Hirschhausen has committed the heinous crime of whistleblowing on corrupt colleagues, and as a reward is posted to a rural backwater where life is a challenge.

Reviewed on 16 January 2021 by Chris Roberts

Under the Cold Bright Lights

Acting Police Sergeant Alan Auhl works cold cases in Melbourne, apparently unassuming, but he has a house full of waifs and strays and can go that extra mile when required.