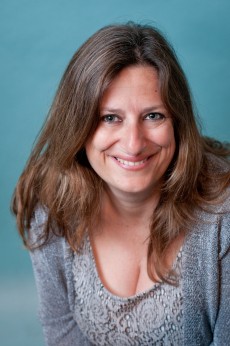 Elly Griffiths was born in London, studied English at King's College London and worked in publishing for 15 years. She wrote four books (under her real name Domenica de Rosa) before her husband’s career change inspired her to write about forensic archaeologist Dr Ruth Galloway. Her agent told her she needed a 'crime name' so she became Elly Griffiths. The first Ruth book, The Crossing Places, won the Mary Higgins Clark award. The seventh book, The Ghost Fields, was published in March 2015 and The Zig Zag Girl, the first in a new series, in 2014. Elly lives near Brighton with her husband and two children.

When Justice Jones takes part in a new school initiative to involve pupils with the local community, she doesn’t expect to end up with a suspicious death to solve. But then Justice attracts mysteries the way flowers attract bees.

Reviewed on 27 November 2021 by Linda Wilson

When a group of metal detectorists find a dead body on a bleak north Norfolk beach it's the start of another case for forensic archaeologist Dr Ruth Galloway and Detective Inspector Harry Nelson. All clues lead them to the isolated Black Dog Farm and the local legend of a ghostly hound whose appearance precedes violent death.

Ninety-year-old Peggy has two main interests in life – observing the comings and goings beneath her bay window in Seaview Court and murder.  So when Peggy is found dead in her favourite chair, notebook by her side, it must surely be from natural causes – mustn't it?

Dr Ruth Galloway has a new job and a new life in Cambridge. But a murderer’s confession drags her back to north Norfolk to work again with DCI Harry Nelson, the father of her young daughter.

Brighton 1963 and a schoolgirl has gone missing from exclusive private school Roedean. It looks like she's a runaway but there are disturbing similarities to the disappearances of a young local nurse and a teenage Modette.

When Justice Jones arrives at her new boarding school, she fully expects to hate it, but then she discovers there’s a murder to get her teeth into, and suddenly things don’t seem quite so grim.

Clare, a teacher at Tolgarth High, is discussing a short story called The Stranger with members of a creative writing group. The story is a Gothic horror but Clare has no reason to believe that the school is about to undergo its own horror story.

Archaeologist Dr Ruth Galloway and DCI Harry Nelson encounter some unwelcome echoes from the past when bones are discovered on an ancient Norfolk site.

Reviewed on 23 February 2019 by Sharon Wheeler

University lecturer and forensic archaeologist Ruth Galloway is asked to lend her expertise to the discovery of bones in an Italian hilltop village. But the past and present collide when there’s a present-day murder.

On the eve of the Coronation, DI Edgar Stephens and magician Max Mephisto uncover an anarchist plot while they attempt to find the killer of their wartime commander.

The disappearance of one rough sleeper and the deaths of two others all seem to have a connection to the mysterious network of old tunnels under the city of Norwich.

The Woman in Blue

It’s almost Easter and pilgrims are due in the small Norfolk town of Walsingham. Except, two women have been murdered and female priests are the targets of poison-pen letters.

Reviewed on 27 February 2016 by Sharon Wheeler

Archaeologist Ruth Galloway uncovers some dark family secrets as she helps police investigate the discovery of a World War II fighter plane with the wrong body on board.

Archaeologist Ruth Galloway has uncovered bones which may belong to a Victorian murderess. But DCI Harry Nelson has a more modern death to worry about.