One of the most refreshing things in our genre has been the explosion of translated crime fiction. You can recline regally in your armchair whilst being transported to seemingly every corner of the world.

A number of our reviewers have made themselves comfortable on the translated side of the genre. We’re lucky to have our very own Scandi queen, Ewa Sherman, who knows her patch inside-out. Just occasionally other reviewers sneak along to join her amidst the angst, trees and snow. This week, Chris Roberts, who’s very well travelled in real life and reads widely across international crime fiction, reviews Kristina Ohlsson’s Buried Lies, in which a woman’s brother believes the case against his sister, imprisoned for multiple murders, is flawed. Chris says there’s plenty of angst but no snow (he said that, honest, not us!) Ewa, meanwhile, was very taken with 3 Minutes by Roslund and Hellstrom, in which things get complicated for a former government agent on the run from his old life in Sweden. She describes this as an intense and pacey thriller, populated by vivid characters, violence, corruption and big money. She also liked The Lake by siblings Lotte and Søren Hammer, and says they present a dark and extremely unpleasant underbelly of the liberal Danish society, as far from hygge and candles as is possible.

If you’re looking for some more quality releases from abroad, Kati Barr-Taylor praises Luca D’Andrea’s debut, The Mountain, which is set in north-east Italy, calling it beautifully written and outstandingly translated. Chris Roberts was very impressed with Bled Dry in which a Casablanca detective is under pressure to get quick results in the case of a murdered couple. Chris says he can’t recommend Abdelilah Hamdouchi’s book too highly. Across the Pond, Hap and Leonard return in Joe R Lansdale’s Rusty Puppy, where the mismatched duo are investigating the murder of a young black man. John Cleal praises the smart dialogue, colourful characters and the relentless pace of this page-turner.

We can also guarantee you a healthy dose of thrillers each issue (not all of them willy-waving ones, despite the best efforts of one of your editors!) John Cleal was impressed with Nelson DeMille’s latest adventure, The Cuban Affair, featuring a combat veteran-turned-charter boat captain and describes the book as brilliantly written with DeMille’s signature humour throughout. Linda Wilson dived with her usual indecent haste on Andy McNab’s latest offering, Line of Fire, which sees the return of former SAS operative Nick Stone who is hunting for a woman. Linda says this is more techno thriller than all-out action, but she was still hooked. My Name Is Nobody by Matthew Richardson follows the story of a former highly-rated MI6 officer. Arnold Taylor says the book paints a convincing portrait of Britain’s intelligence services.

Kati Barr-Taylor, on the other hand, wasn’t convinced by Paula Hawkins’ second book (her wot wrote The Girl on the Train) and says she found the cast of thousands in Into the Water hard to keep up with. There was better luck for other reviewers on British soil. Big-hitter Ian Rankin has written an audio exclusive, The Deathwatch Journal, which takes a hard look at the use of the death penalty in Scotland in the early 1960s from the point of view of a prison guard who has his doubts about a condemned man’s conviction. Linda Wilson says this should serve as a salutary warning to anyone who believes in the return of the death penalty. Kate Balfour has come late to Leigh Russell’s DI Geraldine Steel series. She says the plot of Deadly Alibi is clever, but overall, didn’t find too many thrills. For those who enjoy visits to Derbyshire and the surrounding area, Stephen Booth’s police duo, Fry and Cooper, are back, and the search is on for a missing man in Dead in the Dark. Linda predicts that if you don’t know the area, this will make you want to visit. And Chris Roberts recommends the seven short stories in Going Down Slow as an introduction to the work of the prolific John Harvey, with appearances by two of his well-known characters, Jack Kiley and Charlie Resnick.

There’s a handful of slightly quirkier British releases this issue. In The End of the Web by George Sims, a philandering middle-aged antiques dealer is found dead next to the body of a beautiful younger girl. His widow asks an ex-detective to investigate. John Cleal says this is a clever and unorthodox tale of the unexpected. Walden Of Bermondsey recounts several tales of life in the crown court, both in the courtroom and behind the scenes. Chris Roberts says there will be the inevitable comparisons with Rumpole but he feels Peter Murphy has put his legal career to good use. In The Prime of Ms Dolly Greene by EV Harte, a tarot reader must use her people skills and sixth sense to solve the puzzle of a missing woman. Anthea Hawdon wasn’t keen on the main character, but does want to see how the series develops.

John Cleal returns to his beloved historicals with Marked to Die which sees Bradecote and Catchpoll hunting for a mysterious archer preying on travellers. John hopes it’s not the last we’ll see of Sarah Hawkswood’s 12th century detective duo. Linda Wilson takes a trip back in time to the English civil war in Frances Hardinge’s powerful and lyrical A Skinful of Shadows. This outstanding YA ghost story with a difference entranced Linda from start to finish. John Barnbrook was equally smitten with The Book of Dust, the latest book in Philip Pullman’s His Dark Materials series. John says if you loved the previous books, you’ll adore this one, too.

It’s author LC Tyler under the spotlight in the week’s Countdown. He’s certainly had a varied career, and picks an equally varied – and entertaining – bunch to hang out with for a drink! 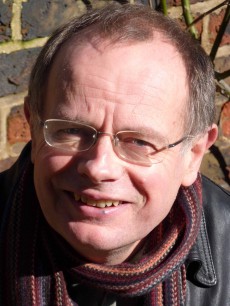 LC Tyler grew up in Southend, where he dreamed of writing a novel one day. His time at Jesus College, Oxford gave him a degree in geography and an unbelievable punting technique.

On leaving university he worked briefly for the Department of the Environment before joining the British Council. Over the next few years he lived and worked in the Far East, Africa and Europe. He learned morris dancing in Hong Kong, rowed on crocodile infested waters in Brunei, ran through the Malaysian jungle with the Hash House Harriers and had tea with the King of Romania in Khartoum. Once back in England, he became chief executive of the Royal College of Paediatrics and Child Health for about 12 years.

But he had not given up on his earlier ambitions. He had won an Ian St James Award for one of his short stories in 1996 (Kate Atkinson was another winner that year). His first novel, The Herring Seller’s Apprentice, did not appear, however, until 2007. This was followed by six others in the Herring series. He also now writes a historical series featuring John Grey, a 17th century lawyer.

He has twice won the Goldsboro Last Laugh award and was also the winner of the 2017 CWA Short Story Dagger.

From the window, a Victorian Gothic square, lots of parked cars, youthful drug-dealers, rain. Inside, a print of two Sudanese ladies done in henna (reminder of our time in Sudan), a small Royal Copenhagen vase with pansies on it (reminder of our time in Denmark), a pepper grinder (given to me in Sweden), a dog-shaped salt shaker (oddly enough a souvenir of Bangkok). From the other window, the lawn I’ve just spiked and top-dressed and a lovely maple that we dug up each time we moved house, but which is now about 15 feet tall and going nowhere.

Cheese on toast with apple, done to my own special recipe.