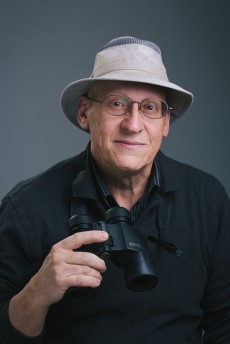 Steve Burrows has pursued his birdwatching hobby on six continents, but he began his life-long interest in birds and nature in the urban parks around his childhood home in Birmingham, UK.

Before writing, Steve held a number of jobs from zookeeper to school teacher (a surprisingly transferable skill set) but it was a move to Hong Kong that proved the catalyst for his writing career. Steve became editor of the Hong Kong Bird Watching Society Magazine, and a contributing field editor with Asian Geographic. His freelance articles on travel and environmental issues have also appeared in international publications including BBC Wildlife (UK), Action Asia (Singapore), Globe and Mail (Canada), South China Morning Post (Hong Kong) and Melbourne Age (Australia).

Steve and his wife Resa now live in Oshawa, Canada, where in addition to writing and bird watching, Steve’s interests include single malt whisky, poker, and various combinations of the two. He is also currently learning to juggle and play the banjo, though he accepts that it’s unlikely he’ll ever be able to do both at the same time.

An exhilarating ride, shared with the love of my life.

Ravioli – heated in the can, directly on the burner. Remove from heat, hold can with potholder, eat ravioli with spoon straight from can – preferably over sink. Recycle can, wash spoon. Done! Now back to writing.

Okay, I can explain this...

Hypocrisy
Insults to my intelligence

You know that list of dreams you have? Life’s working on it, so be patient.