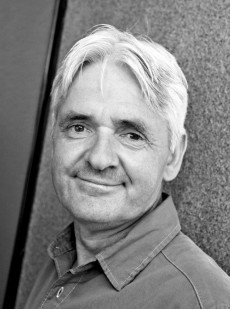 Kjell Ola Dahl was born in 1958 in Gjøvik. He grew up in Oslo and travelled widely before settling down and becoming a teacher in maths, economics and psychology.

He was 35 when he published his first book, and has since published 12 novels, including a series of police procedurals/psychological thrillers featuring investigators Gunnarstranda and Frølich. His work has been published in 22 countries.

Twenty years ago, he left teaching to become a full-time writer when his three children were 12 (twins) and 14. His wife is a gardener, and it seemed a natural move for them  to acquire a family farm called Torgunrud, which has been in existence since the Middle Ages (about 800 years). It’s situated by Lake Mjosa, about 100km north of Oslo.

Kjell Ola is now a part-time farmer and full-time writer, as his wife produces perennials for sale and his children have left the nest to become (variously) a publisher, water engineer and plumber.

The lake, the train on the other side, the garden, trees and my golfer girl sculpture, my desk, my laptop, books and the rest of my messy office.

An omelette with mushrooms, tomatoes and cheese.

1. Raymond Chandler. To drink a gimlet.
2. Ernest Hemingway. He will have his Montgomery; I will not. I prefer a normal dry Martini. Stirred. Not shaken.
3. Balzac. Just beer for me, which is good … I’ll need to concentrate while he is talking. I cannot imagine what he would drink.
4. Knut Hamsun. I would definitely share a single malt with him. He once wrote that he drank liquor every day for months, and could not understand it, because he did not like it. I am sure he never tried single malt.
5. Arthur Omre, a big Norwegian crime writer in the 1930s. He lived as a smuggler before he started to write. I think we would be drinking some of the liquor he smuggled into Norway.
6. Elmore Leonard. I would ask for tomato juice or maybe rum punch.
7. The last one would be F Scott Fitzgerald. We’d definitely share tomato juice.
Why no women? Because I am a married man.

My hiking boots, knife, camera, glasses, a glass of beer and a good cigar.

words, favourite no, have, I.

The forest, the mountain, the sea and my writing office.

I bought one of Ross Macdonald's early novels. Blue City, and I liked it very much. I also read Palm Beach Finland by Antti Tuomainen. A funny, wise book. I also bought one of Elmore Leonard's books from the nineties, Rum Punch.

If someone is capable of making me rant, they’ll be politicians or journalists.