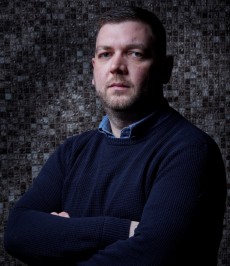 Luca Veste is the non-award-winning writer of the Murphy and Rossi series and standalone novels The Bone Keeper and The Six. He wanted to be a footballer or a boxer when he grew up, but didn’t make it.

He worked in a chip shop for an afternoon, as a kitchen designer for six months (before being found out when his boss realised he’d blagged the interview), an actor (his best role being in a show called The Cavern Club, which involved a costume of lacy top, leather miniskirt, and size 11 high heels) and a civil servant, before becoming a mature student. He studied psychology and criminology at university in Liverpool. His first novel was released in his second year of uni.

He plays bass in the Fun Lovin’ Crime Writers (we played Glastonbury, you know?) and is one half of the Two Crime Writers and a Microphone podcast. He is mainly found at home in Merseyside, wearing one of his 35 pairs of lounge pants.

Glass of Cherry Coke Zero
The remains of a bag of Butter Mintoes
Countdown on the TV
My PS4 with its LFC skin
The complete boxset of the TV series Angel
Picture of my kids
Candles that have never been lit
Too many cushions
A clock that has ‘The Veste family’ across its face.

A nice steak, with fried peppers and onions. With a bit of peppercorn sauce on the side. I’m slowly moving towards veganism, but having trouble giving up steak and mince.

Stephen King – just to fawn over him in a manner he would probably not enjoy.
Robbie Fowler – because he is God.
Kevin Smith – because I wouldn’t have to talk. Just listen in awe.
Sarah Michelle Gellar – to try and talk her into reforming the Scooby gang.
Freddie Mercury – to get pissed and do karaoke together.
Britney Spears – I don’t think I have to explain this one. She is awesome.
My nan – because I miss her stories.

Politics and those people who leave shopping trolleys in the middle of supermarket aisles.

Don’t put on all that weight.