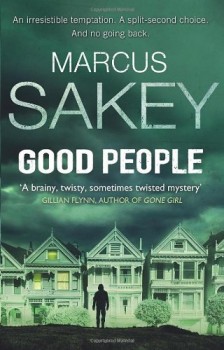 When the tenant of the flat below dies and leaves almost $400,000 in cash, Tom and Anna Read think their problems have all been solved. But their decision to keep the cash involves them with ruthless men who believe they have been double-crossed and will stop at nothing to gain revenge.

Good People poses the question of how far would you be prepared to go to hide the fact you had found a small fortune – in this case around $400,000. Tom and Anna Reed plan to wait to see if anyone claims the cash. If not, they will use it to change their lives, haunted by debt incurred by fertility treatment in their desire to start a family. This simple plan puts them in the path of a couple of vicious armed robbers and the equally menacing, but smoother, boss of a high market drugs syndicate, who all believe they have been double-crossed and will stop at nothing short of torture and murder to recover what they regard as theirs.

Despite this ridiculous premise, Good People is a fast-paced and entertaining read. Marcus Sakey’s main characters, Tom and Anna, are skilfully and sympathetically drawn – she’s a driven bundle of emotions, obsessed with her desire for motherhood, he’s more logical, but out of his depth in the alien situation into which they find themselves through their own greed and lack of honesty. They are, however, let down by their moralising over this issue, which at times is saccharine in the extreme.

Their lead pursuers are rather less well portrayed, one a bog-standard borderline psychotic killer, the other a near Blofeld clone who lectures on the habits of Genghis Khan and who you almost expect to deliver that immortal line: ‘Now, Mr Bond...’

The violence, the threat of which is used to build tension and suspense, is graphic and overdone and the inevitable final triumph of Good over Bad both contrived and unrealistic. Marcus Sakey writes well, with intelligence and passion enough to keep you turning the pages. But the basic plot is so unbelievable it’s more like a whiff of laughing gas than electric shock. Does anyone really think a normal, unashamedly middle class couple can compete against the hardened professionals of organised crime, armed with nothing but good intentions, a lively sex life, and doubtless a slice or two of Mom’s apple pie?

No matter how well written, if this is the bright new face of trans-Atlantic crime fiction, I’ll be happy to stick with the old European model that generally bears less resemblance to a Hollywood B movie.