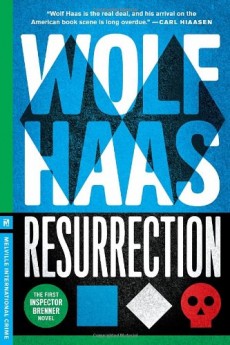 Former police inspector Simon Brenner investigates the deaths of two Americans on a ski lift, but after six months is still at a dead end.

The Swiss resort town of Zell sounds an idyllic place to take a vacation and the discovery one winter morning of two Americans frozen to death on a ski lift comes as rather a shock. Police inspector Simon Brenner gets the job but makes little progress, and when his new boss becomes overly-critical, the 44-year-old Brenner resigns.

Locals are surprised, however, when Brenner re-appears in a new guise as an insurance investigator looking into the deaths. For several months he makes no progress, but eventually his apparently random research into the life of the people of the town throws up the first clues to the mystery.

Resurrection introduced Brenner to the public, and spawned a popular series in the German-speaking world. The style of the writing and the protagonist are equally idiosyncratic but both have a certain charm.

Brenner himself can hardly be said to have a method: he bumbles along accruing trivia, and makes lengthy detailed reports to his employers that can be summarised as ‘nothing to report.’ And when he eventually stumbles across a piece of evidence he is so unaccustomed to the sensation that it takes him a while to filter out the irrelevancies which continually interrupt his mental processes. When important facts come to light, however, we find that Brenner is quick to recognise the implications and solve the case.

It is, however, the interruptions to linear thinking, and his frequent flights of fancy which make Brenner such an interesting character. The writing is also rather captivating, reading much as one would expect a verbal anecdote: short sentences, informal, lots of slang. The informal style extends to the use of tenses too, past tense slipping into present tense for particularly important interviews. Unorthodox as this sounds, only those who are very particular are likely to find it objectionable rather than strangely humorous as the story is related much as one would expect a shaggy-dog story told in a bar.

The irreverent attitude carries through into the picture conveyed of the parochial attitudes and behaviour of this small town, carrying a particular flavour. Amongst the personalities singled out for a mention is the local cab driver, who refuses to push his pink Chevrolet to more than 50kph, and the chief of the local fire department, who mixes up the names of the two petrol stations in town when a fire breaks out. All the wild variety of an isolated settlement is here, and amusingly told.

Brenner is enough of a character to build a series on, and so far there have been five, at least two of which are available in translation. There is a lot to like about Wolf Haas.