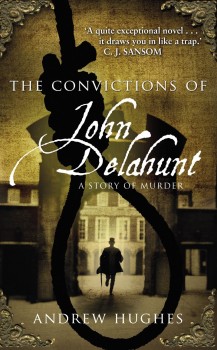 The Convictions of John Delahunt

Amoral student John Delahunt is waiting to hang for the killing of a young boy which shocked Victorian Dublin. He looks back over a life of betrayal in which he sacrificed friends, family, love and ultimately himself in pursuit of easy money and self-interest.

Andrew Hughes’s Gothic, near Kafka-esque horror debut is set in 1840s Dublin and based on the true story of the abduction and murder of a young boy, Hughes convincingly lays bare the sordid world that lay beneath the city’s veneer of Victorian respectability. Students, prostitutes, thieves, muggers and blackmailers jostle with dissectionists, quack phrenologists and sinister Crown ‘law enforcement’ agents in an atmosphere of mistrust and nascent rebellion.

This compelling and sophisticated book is incredibly well researched and beautifully written. It gives a real sense of period, place and the brutal moral dilemmas facing many of its citizens – and evokes the same shocked response as the horrifying acts on which it is based.

John Delahunt, a Trinity College student turned-state informer is a fascinating if sinister and thoroughly unlikeable character – an amoral psychopath in a predatory world where only the most ruthless survive.

Awaiting execution, he is given the chance to record the story of his life – an ever-steepening involvement in a seedy and grim world of perjury, betrayal and state-sponsored killing organised by an unaccountable secret police. Its sheer malevolence offers some difficult reading, but makes this deeply unsettling story all the more authentic and difficult to put down.

We follow Delahunt through elegant ballrooms and shabby tenements to filthy taverns, alleyways and courtrooms as he betrays his friends, his family and finally, himself in an increasingly desperate pursuit of money and satisfaction.

The pace of Hughes’ dazzling debut – part historical novel, part crime thriller, all chilling with its portrayal of poverty, corruption, violence and greed – never changes, but still finds room for some black and often sly humour.

Seamless prose and a carefully-crafted plot whose horrible logic leads inevitably to a convincingly plausible, though surprising, twist ending, offers a fascinating insight into one of the darker periods in Dublin’s history – and reflects much of the tragedy of Ireland itself.