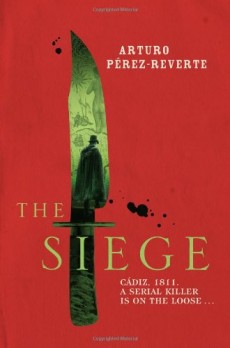 The Spanish port is under siege from a French army, but within the city a brutal serial killer of young girls is threatening to overturn the delicate balance of public order in a hotbed of change.

Arturo Perez-Reverte is Spain’s best known modern novelist and one of the great European adventure storytellers in a line stretching back to Dumas and beyond. His 13 previous books, all immaculately researched and historically accurate, have dealt with much of his country’s quest for empire and European domination, but his latest – and many could argue his best – is set solely in the vibrant port city of Cadiz during the Peninsula War.

Cadiz is nearing the end of a desultory 30-month siege from a French army supporting Napoleon’s brother, King Joseph Bonaparte of Spain, but its geographical position makes storming the city impossible and the English navy guarantees access by sea. It is often difficult to distinguished besiegers and besieged and life goes on pretty much as normal apart from sporadic artillery bombardments.

But Cadiz has problems: a huge influx of refugees, doubts over its future as one of Europe’s great commercial cities as the English extract their price for support in the war of independence from French rule, growing revolts in Spain’s South American colonies, and a serial killer of young women whose attacks seem somehow linked to the French barrage.

This beautifully written and fast-paced series of linked stories offers a manhunt set against its central war theme; a romance; first class action scenes; some fascinating, if bizarre, ideas on scientific detection – and an unexpected ending. On a big canvas Perez-Reverte paints an inventive and bold portrait of a city at a crossroads and its colourful people, the good, the bad and sometimes the downright ugly.

It's a hugely ambitious and intellectual thriller with no heroes, and is far more than a simple whodunit. A corrupt and brutal policeman, a surprising spy, a woman making her way in business in a male-dominated society, a more than mildly eccentric French artillery officer and a ruthlessly unscrupulous sea captain are just some of the colourful characters who people its pages with a riveting blend of incident, historical background and some piercing insights into the mercurial Spanish psyche.

As he has shown in his earlier books such as The Flanders Panel, The Painter of Battles, The Dumas Club, The Fencing Master and the Captain Alatriste series, Perez-Reverte is never afraid of showing humans at their worst, but never allows the violence and brutality both of the times and his plot to overpower his stories.

Finally a word for Frank Wynne, the gifted translator from the original Spanish, whose work makes this intelligent, fascinating and easily read tale compare favourably with anything the author has done before.