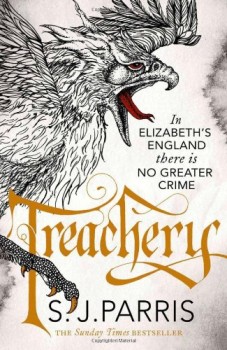 Renegade monk, philosopher, spy, poet and detective Giordano Bruno, is in Plymouth with his friend, Sir Philip Sidney, on a diplomatic mission. Bruno’s investigations into a murder on Drake’s flagship uncover some of the city’s darkest secrets, but expose him – and the country itself – to mortal danger.

Giordano Bruno, renegade Italian monk hunted by the Inquisition, heretic, philosopher, poet and spy, comes of literary age as he uncovers crimes and plots in this fourth thriller of a series set in Elizabethan England.

If you want a glib assessment, this is Shardlake crossed with John Shakespeare with more than a touch of the mysticism of Umberto Eco’s magnificent Name of The Rose tossed in. S J Parris has created a believable and enduring character – and in doing so set herself up as a real contender in a genre dominated by writers such as C J Sansom and Rory Clements.

The setting – the 1580s – provides a rich source for fiction. Elizabeth’s England is preparing for war with the might of Spain. Catholic-inspired plots to assassinate the Queen, whether real or imagined, abound. Religious persecution and suspicion of foreigners is rife. But while Gloriana’s court revels in sonnets, silks and courtly love, ordinary people live in filth and squalor. Disease, starvation and crime are rife, baby selling and child prostitution common.

Bruno’s new adventure gives a convincing sense of this not so glorious past, interwoven with so much intrigue it’s sometimes difficult to keep up with a story that fairly storms along. Escorting his friend, the foppish aristocratic poet Philip Sydney on a diplomatic mission to Plymouth, Bruno discovers that the romantic Sydney, desperate to fight for his country, plans to force Francis Drake to take him on his latest expedition against the Spanish.

Drake’s departure is delayed when an officer on his flagship is murdered and Sydney, anxious to curry favour with the Captain-General, volunteers Bruno to solve the crime. From there the story races through a web of intrigue and mystery, including a plot to assassinate Drake and a secret Gnostic text which threatens the whole basis of established Christianity, both Catholic and Protestant.

This vivid and completely gripping yarn has everything – excellent history, confrontations, life-threatening situations, dramatic but surprisingly realistic escapes, and a fiery but brief romance between the handsome Italian commoner and a titled English widow.

If there is a weakness, it is perhaps an over-generous portrayal of Francis Drake – there is little historical justification for painting England’s most successful pirate as a caring, politically correct, Elizabethan version of James T Kirk!

But Parris understands her subject well and writes with confidence and ease. Her dialogue is nicely balanced between period phrases and colloquialisms. This is a brilliant, fascinating novel, full of surprises right to the end, is almost filmic in its scope and concept and offers the reader excitement, involvement and battlement on so many levels.