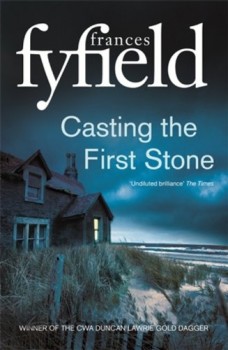 Diana Porteous, young widow, art collector and semi-reformed thief gets involved in the shadier side of the fine art world.

This is my first foray into the world of Frances Fyfield’s books and, relatively quickly, it became obvious that I should have started with the preceding one, Gold Digger, which is still somewhere on my To Be Read pile. But to a large extent, I do think it’s an author’s job to make their books stand alone, as there’ll be as many people who come late to the series.

My problem here was that Diana Porteous, a young widow, art collector and semi-reformed thief, seemed to come complete with an awful lot of baggage, and her relationship to the many, varied and extremely eccentric members of her extended household wasn’t always obvious or indeed explained, which hampered my ability at times to work out what the hell was going on.

I was also uneasy about the fate of a scruffy mongrel, running wild on a wind-swept shingle beach, which cast something of a pall over my enjoyment of the book. Yes, I know, someone with my sensitivities over animals hasn’t exactly picked the best genre to get involved with, but in my defence, animals are pretty badly served in books in general, all too often being used to deliver an – often cheap – emotional punch. I really do wish there was a book equivalent of www.doesthedogdie.com. It would make my choice of reading material so much simpler. OK, rant over. Back to the book…

The plot revolves loosely around the theft of two pictures from Di’s late husband Thomas’s collection, as well as some underhand dealings with art stolen from a neighbour. There’s also a rather surreal sub-plot involving the bones of Thomas’s first wife, which brings with it some beautifully evocative descriptions of a sea-swept coastline and the almost mysterious Goodwin Sands, somewhere I’d now love to visit.

Casting the First Stone is strong on people rather than plot, which is largely secondary to the glorious eccentrics who people her pages. Frances Fyfield draws spare and stylish pen portraits of all her characters, from Di Porteous herself, to her friend and agent, Saul Fortune and his sister Sarah, housekeeper Peg, as much of a misfit as Di herself, and Jones, Di’s self-styled protector. Some of Fyfield’s best writing revolves around Jones, an ex-policeman described as having been ‘prematurely and involuntarily retired on account of his creative attitude to law and order.’ Jones, with his creative introduction of the word ‘fuck’ into everyday conversation, endeared himself to me as soon as he shambled onto the page.

And if I get the time, I will go back to read Gold Digger, in the hope of seeing Di put her stone-throwing ability to good use, something that wasn’t really capitalised on here.