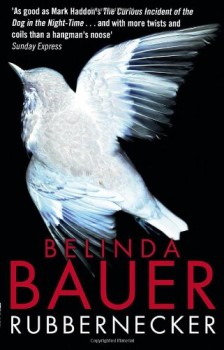 Student of anatomy Patrick Fort is a young man with a mission – to find out what happens when people die. His Asperger’s Syndrome means he will pursue that to extremes – and those extremes will lead him to a possible murder.

Rubbernecker is set partly in a dissecting room, part in a coma ward, and hardly sounds a bundle of laughs, but in places it is extremely, if blackly, funny – and above all a compulsive read. Belinda Bauer holds nothing back in describing the grim procedures, or the tragedies and cruelty of a neurological ward, but her innate compassion somehow makes these things almost mundane.

Since Patrick Fort lost his father in a car accident, he has been obsessed with discovering what happens when people ‘stop.’ An Asperger’s sufferer, he is driven to seek a fuller understanding of death. University studies in anatomy fail to help him discover what happened to his father, but his obsessive condition leads him to notice irregularities in a dissection and he finds himself trying to solve another mystery – could an anonymous corpse with an official death certificate be a murder victim?

This brilliant book, with a protagonist and premise unlike any you will have read before, jumps between several points of view, each with a distinct voice – Patrick himself, a coma patient, and a selfish and lazy nurse – and each sucks you further into an essentially simple, but also fiercely complicated plot

The characterisation is excellent. Patrick, a complex yet rather endearing character with all his misunderstandings of other’s responses, is particularly well drawn, a likeable and sympathetic young man whose sometimes outrageous actions actually make perfect sense – and his condition is never simply used as a plot device. Meg, a fellow student; Sam, the coma patient; Tracy, the nurse; and particularly Patrick’s mother, driven to drink and despair by her son’s behaviour, are also well developed. Even the bit-part players have a real ring of truth.

Patrick’s obsessive determination drives a story more complex than it first seems and which moves at a fair pace towards a final surprise in what is a genuinely satisfying ending. Bauer’s research is brilliant – the police procedural as accurate and believable as everything else. The squeamish may find some scenes gruesome, but unlike so much noir it is quite clinical and without gratuitous blood and violence.

Critics have compared this to Mark Haddon’s The Curious Incident of the Dog In The Night-time, but Patrick’s character is so engaging and sensitively drawn his condition is never allowed to dominate an original story. Rubbernecker is an absolute belter.