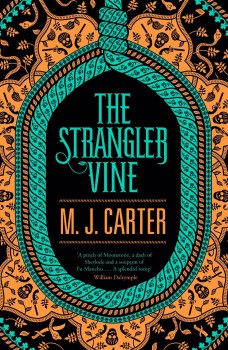 In 1837 Calcutta, Ensign Avery is sent upcountry with a disreputable recluse to discover the whereabouts of a famed writer.

When William Avery, Ensign of the East India Company, is sent to summon Jeremiah Blake for an interview at the Governor General’s office, he is insulted with a rude reply. He is astounded when he is told that he must accompany Blake, a recluse who appears to have ‘gone native’, in a search for writer Xavier Mountstuart, the talk of 1837 Calcutta for a scandalous book which hints at lapses in behaviour by some of the city’s wealthiest citizens.

Avery is a fan of Mountstuart, whose works first inspired him to make his way to India, but once on the road finds Blake disinterested in discussing their mission. While Blake is able to converse with any native who crosses their path, Avery speaks only English and would be entirely isolated were it not for Aziz, a Moslem guide. As their path becomes more remote their small party is vulnerable to attack by thieves that threaten travellers throughout India, and Avery is introduced to the murky side of local politics.

This is a tale of adventure set in a world excellently re-created, as far as it is possible to tell at such a distance.  It is told in the first person by Avery, an Englishman very much a product of his time and place. He misses his native Devon, and apart from a Miss Larkbridge finds little agreeable in India. He takes no trouble to learn a native language or investigate local culture, which he feels is not worth taking the trouble to know. The East India Company is on a civilising mission, and its works are not to be criticised. Avery’s sole talent is proficiency with a firearm.

In contrast, Blake is a character of great subtlety, a man who mixes with the locals and after many years of observation has no illusions about ‘The Company’ and the self-interest which sustains it. The picture we have of him is, however, given only through Avery and it is fairly late in the book before we fully understand the political machinations which surround the search. Key to the quest is the prosecution of the Thugs or Thugees, a sect of robbers and murderers revealed by a real character, William Sleeman, who led a campaign in the late 1920s and 1930s to suppress them.

While the sensibilities of the author and the historical interpretation revealed through the story are entirely contemporary, Avery’s commentary gives this tale of India an exotic feel reminiscent of John Masters or earlier, Victorian, crime writers. The two protagonists are excellent foils for each other and further adventures for the pair are already promised.