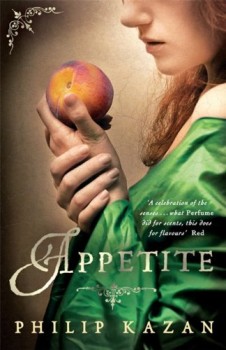 Nino Latini has a unique gift, a massively heightened sense of taste and a desire to create the perfect feast that will make his name as a chef in some of the most magnificent houses of Renaissance Italy. But his gift leads him into trouble and physical danger.

What am I doing reviewing for a crime site what is essentially a morality tale combined with an at times almost poetic love story set in Renaissance Italy? The answer is simple. Philip Kazan’s epic story of a supremely talented young man’s search for meaning and purpose in his life embraces every one of the seven deadly sins, clothes them in the silks, satins and gold of the princes of the church and the rags and filth of the street beggars and brings them to shocking and violent life.

Nino Latini, son of a butcher and nephew of the great artist and womaniser Fra Filippo Lippi, has a unique gift, a massively heightened sense of taste and a chef’s passion to create the perfect feast. His other passion, for his tempestuous and beautiful childhood friend Tessina Albizzi, forces him to flee his native Florence and places him at the centre of some of the great events of mid-15th century Italy.

In an age of stark contrast, gluttony, lust and conspicuous consumption walking hand in hand with abject poverty, disease and treachery, Kazan centres his work on his hero’s remarkable gift – the ability to visualise food as a great artist sees beauty or passion. The lavish descriptions of taste and cooking, particularly the great banquets in all their extravagance and artistry or even a street tripe seller’s own discovery of perfection, are a revelation.

So too is his feeling for the Florence of ‘Il Magnifico’ Lorenzo di Medici – the original Goldenballs after his family crest – home to magnificent artists such as Sandro Boticelli, Donatelli, the young Leonardo da Vinci, the cultural capital of Europe. The 60,000 inhabitants crammed inside its walls come to raucous life and their crowded streets, towers, churches, brothels, restaurants and workshops resound to the bustle, argument and street slang that make up this vibrant city, where even the practise of outrageous practical jokes has become an art form.

Kazan’s brilliant and evocative description of a game of calcio – a cross between soccer and a street brawl where the only rule is that knives are not allowed – explains a great deal about the progenitors of the ironmen defenders Marco Tardelli and Franco Baresi who did so much with solid muscle (and occasionally stunning skill) to win a world cup for Italy!

But food is the city’s great leveller. Nino’s extraordinary talents lead him higher, but he is a naive voice in a sophisticated and brutal world. After his own version of a culinary joke backfires he follows his master chef to Rome and the kitchens of the Gonzagas, Borgias and even the Pope and in a pacey and enthralling plot he commits more than his share of young man’s extravagances and mistakes.

This intense, sprawling and addictive page-turner filled with often sensuous prose engages all the senses and is a triumph of energy and colour which brings medieval Italy to life. If you like an intelligent, engaging and exquisitely written story as a change from the drab brutality of modern crime, settle down with a good bottle of wine and enter Nino’s world. There, I’ve got the whole way through without a single food pun – but what does Kazan do now for a digestif?