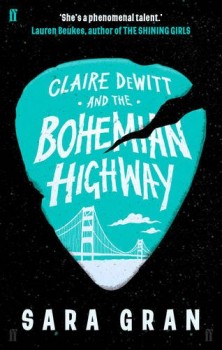 Claire DeWitt and the Bohemian Highway

San Francisco PI Claire DeWitt seeks the killer of ex-boyfriend Paul, and re-examines the beginning of her professional life in Brooklyn.

Claire DeWitt is a strikingly unusual private eye, with a philosophy based on the metaphysical musings of an obscure Frenchman and a schoolgirl detective out of a comic. When ex-boyfriend Paul is found shot in his own flat, the San Francisco police tip her off. It looks like a thief was interrupted, but there are a few details which don’t quite add up, and Claire seeks answers.

Her progress is helped, or hindered, by her strong feelings for the deceased and her substitution of a variety of drugs for more customary nutrition. In occasional chapters we hear about Claire’s first detective case in Brooklyn, aspects of which are still unresolved.

Sara Gran presents a compelling picture of a distinctly American 21st century sub-culture, predominantly comprising young people of under-performing parents who make their own rules as regards relationships, use of alcohol and narcotics, and how to earn a living. Some are rich and some are poor but there is a common belief in tattoos, alternative medical therapies, and what constitutes culture, all some distance away from mainstream USA. It is a significant tribute to Gran’s abilities that she manages to make this society engaging and reasonably convincing for the length of the book.

There are, frankly, a few aspects of the story that do nag at the reader more accustomed to a more conventional background. Could Claire really manage to support such a costly lifestyle on the meagre earnings from her detective business? Would reliance on intuition not be fatal to such an enterprise? Is it possible to live a life with so little interaction with the commonplace - family connections, the supermarket, the news report?

But putting such questions aside, the book is quite extraordinary: Claire’s life feels more like science fiction than a tale set in a current-day major US city, and by challenging the reality we all take for granted, and familiar assumptions as to how a detective operates, Gran provides genuine stimulus for thought.

City of the Dead, the first Claire DeWitt novel, garnered some big-name fans. Claire DeWitt and the Bohemian Highway is unlikely to disappoint them: the writing is certainly powerful and sustains interest in Claire and her world. Crime fans interested to try something different should certainly give Sara Gran’s latest a try.