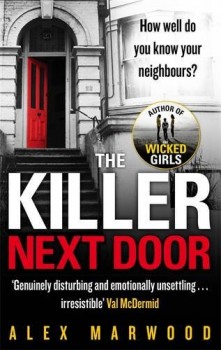 The Killer Next Door

As London swelters in a stifling heatwave, the tenants of a bedsit and its landlord each try to hide their own secrets, but one, an obsessed serial killer, must try more than most.

Anyone who has read Alex Marwood's The Wicked Girls will love this haunting and dark tale of suburbia. Marwood, with her ability to bring characters to life and her instinctive understanding of human nature – particularly women – has stamped her authority on the genre in the style of a true champion.

No. 23 is typical south London bedsit land – a crumbling sub-divided Victorian property totally unlike the newly gentrified upper middle class million pound homes of Wandsworth, Clapham or the rising Streatham. Places like this attract the lost and lonely and this is no exception. Each of its tenants – and its lecherous and disgusting landlord – has some sort of secret.

Collette is on the run with a holdall full of her gangster ex-boss’s money; Cher, an underage escapee from a children’s home, is living on theft and con tricks; Thomas tries to make friends with his neighbours; Iranian asylum seeker Hossein keeps out of the way of agents of his country’s regime while waiting his Home Office clearance. There is also the quiet Asperger’s sufferer who nobody sees and who lives for his music, and the ageing and increasingly lonely Vesta, the motherly sitting tenant who has survived three landlords, is there for them all, and who thinks she knows everything that goes on in the house in which she was born. Then there is Psycho, the masterful and occasionally vicious tomcat who has adopted the house and plays his own part as enforcer and comforter.

In the sweltering temperatures of a rare London heatwave the six humans pursue their own lives until an accidental killing pushes them into an uneasy alliance. But one has even more to hide – a multiple killer, hiding their weird obsession while looking for their next victim.

The pace of what is essentially a character-driven book never slows and the characters are so finely drawn that they fascinate. Even the money-obsessed and truly repulsive landlord grabs attention. A clever melding of storylines means you are never sure of an ending which eventually both satisfies and surprises – although the hyper-critical might find it a little short on explanation regarding two of the protagonists.

This is a psychological thriller of the highest order, at times disturbing, dark and even disgusting, and at others genuinely heartwarming with the flowering of unlikely relationships. Above all, it’s a clever, beautifully crafted novel about believable people that will forever shake your view of bedsit suburbia.