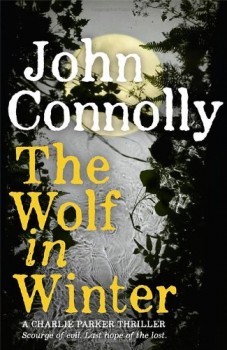 John Connolly’s Charlie Parker series was a slow burner for me. I kept thinking I should like it more than I did – and I wished someone had given those very talky earlier books a damn good edit! But hell, they were spooky.

And that air of menace was finally what won me over – that and Charlie’s laconic sidekicks Angel and Louis who often appear to have the best of the action while the main man wanders around looking angsty. Not that he hasn’t got plenty to be miserable about, given those he has pursuing him and the people he loves.

The Wolf in Winter is Connolly at his Gothic best. It’s the 12th outing for private investigator Charlie, and his old enemy The Collector is still at large. But the main and most compelling focus of the book is the small town of Prosperous, which initially seems as it sounds. It has a cabal of distinguished elders worried for its future and who wish to keep it as a safe environment and to protect the townspeople.

As always with Connolly, though, there is evil beneath the seemingly mundane. A homeless man wants Charlie to investigate the disappearance of his daughter, who seemed to be heading for Prosperous. And she’s not the only young woman to have gone missing.

The tentacles of evil have spread from earlier books - if you're behind on the series, you may be a tad confused, although The Collector plot thread is largely the secondary one here. Angel and Louis are still on his trail, though, which gives Connolly the chance to write more of their wonderfully deadpan exchanges. Not that you want to mess with these two, mind …

Connolly is at his best when he can build a book around myths and legends – and he does that brilliantly here with the Green Man thread. He also explores what happens when basically decent people allow evil to flourish around them.

There’s one hell of an ending that had me wondering just where Charlie can go from here. Connolly is one of the few writers who has really nailed that fine line between crime fiction, horror and woo-woo. Like all of his books, The Wolf in Winter is best read with the light on.