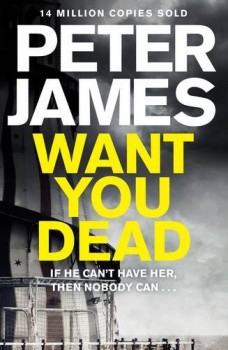 Superintendant Roy Grace is about to get married – but there's a maniac with a score to settle and a love of lighting fires on the loose in Brighton.

Peter James's Superintendent Roy Grace series is one of my annual treats – it's a series that's well into its stride, but has generally stayed fresh and sprightly, with several ongoing threads handled neatly so that they don't overwhelm the new material.

At the start of Want You Dead, Roy is preparing for his marriage to Cleo. Former wife Sandy, who has been AWOL for years, has been declared dead. Except, we know from previous books that she's alive and well and been living in Germany. So the spectre may very well materialise at the feast …

On the crime front, the book kicks off with a vivid description of the torture and murder of Brighton GP Karl Murphy. It takes a while for the police to work out what the reader knows – that young estate agent Red Westwood, who has been dating Karl, is being stalked by her scary ex-boyfriend Bryce Laurent.

That's an old chestnut of a plot, but James gets away with it, mainly because Red is a likeable and feisty character – there are just a couple of occasions where her actions don't ring quite true. And knowing James, who prides himself on his extensive research and contacts in Sussex police, it's very likely based on a true story. It's obvious from the acknowledgements at the end that some of his sources appear as themselves!

Want You Dead is a slow starter and seems sluggish for about half the book – and it's not helped by a rash of 'had he but known' lines at the end of chapters. James is too experienced an author to need to rely on that artificial tension. But then it picks up speed, mainly with a shocking scene that crashes in from a clear blue sky to cause heartbreak for a couple of the regular characters. I admit freely that I squawked loudly in horror!

Just occasionally the book has the feel of being One Damn Thing After Another. But James juggles the plot threads adeptly – Roy's upcoming wedding, the return of some faces from his past and the ongoing battle with a villain who seems to possess a Superman-range of skills and who has a penchant for starting fires.

Want You Dead is a dark book and it's not the best in the series, given the pacing issues and the rather implausible baddie. But it's given me my annual fix and as usual I was hooked. And James has left us some enticing threads for the next outing. Roy and his sidekick Glenn Branson, now a DI, are great characters, and I wonder why it's taking so long to get them onto the small screen.