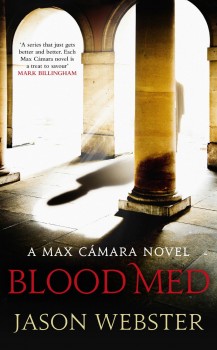 In a Spain unsettled by financial breakdown, detective Max Camera and his friend Torres investigate the suicide of a banker and the killing of a woman journalist.

Detective Chief Inspector Max Camera of the Policia Nacional is back in Valencia, living with his journalist girlfriend Alicia and his anarchist grandfather Hilario. Spain’s banking system is on the brink of collapse and the king is on his deathbed, unable to exercise any calming influence on the incipient civil unrest.

Things are no better at police headquarters. Despised co-worker Maldonado has become Camara’s boss, and the threat of redundancy has affected the normally close working relationship between Camara and his colleague Torres. Camara is assigned the case of a woman shot repeatedly at close range; his assigned partner, Laura Martin of the sexual violence squad, suspects the victim’s husband, but Camara is not so sure.

In this, the fourth in the series, Camara’s efforts are more than hitherto bound up with broad political developments in the country. Previous books have explored the honesty of certain local police or politicians, with the anarchist Hilario standing in the background disapproving of the state of the country generally, but in Blood Med the failure of retail banks, greed and corruption are shown to be a matter of pressing general concern.

Certain elements of life are reminiscent of the unrest which led to the repressive days of Franco, still of recent memory. Fraud has deprived many in the middle class of their savings, unemployment is rising, and an aggressive right-wing faction is becoming very vocal. There is no doubt where Camara stands in all this: he views those he holds responsible with derision, and is active in an informal food distribution centre for the poor which is operated in a totally unauthorised way from a metro tunnel, a scheme abandoned when the money ran out.

One of the more endearing aspects of Camara is his discomfort with the more regimented aspects of police life, but here we find him very much in conflict with the majority of the service who tend to the right politically. He also seems less in control, with a hysterical outburst when his grandfather is taken ill, and a very ill-advised rush to the rescue of the threatened later in the book. While his emotion makes for great excitement, and his heart is undeniably in the right place, some will find his actions foolhardy to an extent which strains belief.

Nonetheless, there is plenty about Blood Red to like. As with previous books in the series, the Spanish setting is convincing and Camara himself is a sympathetic character who, although frequently in turmoil, invariably steps up to the mark in support of those who need protection. As ever, the writing is good and the story builds very nicely to an exciting conclusion, maintaining the quality Jason Webster has led us to expect.