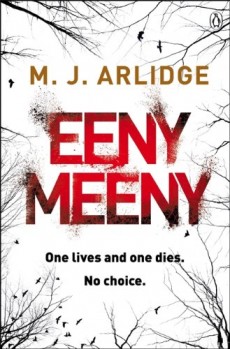 Two people are trapped with no food or water. There’s only one way out – kill or be killed.

There’s no denying that the central premise of Eeny Meeny is a great hook for any crime novel. A young couple have been kidnapped, locked away somewhere with no food or water and no means of escape. But then they find two things: a mobile phone and a gun. The message on the phone is simple and horrific. When one of them kills the other, the survivor will be freed.

At first, it’s unthinkable. They love each other, there’s no way they’ll do what their abductor wants. But at last, driven almost mad by unimaginable hunger and thirst, one of them finally succumbs, and the survivor is left to live with the guilt of what they’ve done.

DI Helen Grace doesn’t know what to make of the case. Is the survivor telling the truth or not? The press are soon sniffing around, and journalist Emilia Garanita isn’t in the slightest bit convinced by police attempts to cover up the truth. When other pairs of people are taken as well, it soon becomes clear that there’s a very inventive serial killer at work. The abductions seem random, but Grace is certain that there must be some connection between the victims. What she has to do is find it, before more people face the stark choice of kill or be killed.

Despite the extremely commercial idea behind the book, my fundamental problem with Eeny Meeny was that I never felt much of a connection with any of the victims. At best, they’re sketchily described, and there’s very little time spent with them in their horrific confinement, beyond the expected grim details of bodily functions. As a result, it’s hard to care about what happens to any of them, even when it’s a mother and her disabled daughter who have been imprisoned in their own home.

I had a similar problem with Helen Grace herself. She’s dangerously close to falling into stock character territory. She has a troubled past, and the usual raft of issues without which no police protagonist seems to be complete these days. Grace tries to escape from her problems by engaging in BDSM, but even there she doesn’t follow the ‘rules’, and I was left wondering what crime writers are going to do next to make their main character stand out from the herd. There were rather too many standard tropes in Eeny Meeny for my taste and not enough time spent on establishing any of the main characters or the victims.

M J Arlidge has a background in writing for television, and I wonder if he has come to rely too much on visual impact rather than any in-depth characterisation. Aside from my reservations, I suspect he’s onto a winner here, as the kill or be killed idea is a strong one, but if Helen Grace is going to gain a following after this first outing, he’s going to need to do more to flesh her out, rather than just putting another flawed copper up in front of the audience and expecting her to stand out from the crowd.