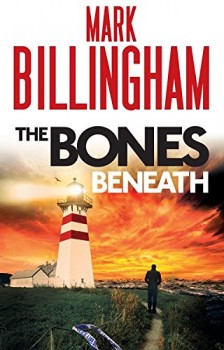 Tom Thorne, newly reinstated to the murder squad, gets landed with a job that he really doesn’t want: accompanying psychopathic murderer Stuart Nicklin to a remote island off the Welsh Coast to look for the body of his first victim.

Tom Thorne is back where he wants to be, out of hospital, out of uniform and back in the murder squad. There’s just one snag. He’s got to accompany Stuart Nicklin, a psychopathic murderer nursing a distinctly unhealthy obsession with Thorne – who was the cop who succeeded in putting him behind bars in the first place.

No one understands why Nicklin has suddenly offered to lead investigators to the place where he buried the body of his first victim, 25 years ago, when he was only in his teens. The problem is that – apart from having to be in the company of a man he loathes – Thorne has to take him to a remote island off the coast of north Wales. To get there, they have to be ferried in a small boat across an unpredictable stretch of water, and run the risk of being stranded there by bad weather.

Thorne’s convinced the whole thing is a set-up of some kind, a disaster waiting to happen, and although DCI Russell Brigstocke is inclined to agree with him, they can’t risk the public opprobrium that would follow if it gets out that they’ve not taken the opportunity to give one of Nicklin’s victims a decent burial.

Nicklin is dangerous and manipulative, at his most chilling when he’s having seemingly innocuous conversations with the unfortunate coppers and prison officers stuck with the job of escort duty. He delights in needling everyone around him, taking pleasure in being able to unsettle people with a word or a look. For reasons known only to himself, Nicklin has insisted on being accompanied by one of his fellow prisoners, Jeffrey Batchelor, a man imprisoned for beating to death the teenager who dumped his daughter by text message, and it’s Batchelor who provides one of the most emotionally searing scenes of the book.

Mark Billingham builds the tension as skilfully as ever in The Bones Beneath, combining the remoteness of the settling with the edginess of Nicklin’s escorts to provide the sort of creeping menace redolent of the more nerve-jangling type of horror story. I was reminded all the way through of funfair ghost trains as a kid, where you spent the whole ride expecting skeletons to jump out of cupboards at you and screaming in delight when they did.

There are times when the switches between past and present seem a little clumsy and when the action does finally kick off, Billingham makes a jarring and unnecessary shift from past to present tense, presumably in an attempt to lend even more immediacy to what’s going on. The Bones Beneath doesn’t need any stylistic devices of that type; it’s as cold as a night on a foggy mountainside, and drags you along with the inexorable force of an outgoing tide. There were definitely times when I felt like reading from behind the safety of the sofa.