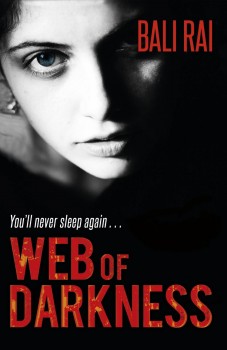 Lily is thrilled when an incredibly attractive boy wants to be friends with her on Facebook and accepts his invitation despite the fact that she’s never met him. But is he really all he makes out to be?

Web of Darkness reeled me in just as fast as the incredibly attractive Benedict reeled in Lily, an insecure teenager with a bad body image. The thing I like so much about great examples of young adult writing is the speed at which they progress, and Web of Darkness was no exception. I read it in a day, genuinely not wanting to put it down, as a frightening story of just how vulnerable we all our in our online lives started to unfold.

Lily Basra, in common with most teenagers, spends as much time interacting with her friends online as she does in person. Facebook and Twitter play a huge part in her life and that of everyone else she knows at school. She thinks she’s internet-savvy, and yet she thinks nothing of accepting a friends request on Facebook from someone she’s never met. Hell, he’s attractive, so why not? Benedict flatters her, talks to her about her feelings and Lily soon comes to count on him as a real friend.

Her new friend is there for her when a spate of suicides at her school rocks everyone to the core. Amy, the first to die, has been subjected to horrible bullying both in person and online, and although neither Lily nor her best friend Tilly were involved in that, they both feel upset and guilty. Bali Rai writes about real teenagers facing real problems. Any parents reading this will no doubt feel horrified at the grip Facebook and other social media sites have on their children, but how many of them will be equally lax when it comes to internet security? Quite a lot, I’m sure.

Rai’s depiction of a large cast of multi-racial teenagers is as sharp as broken glass. There’s out-spoken, loyal Tilly who’s self-confident enough to empty a plate of food over one bully’s head; Danny, who deals with being a gay Asian boy by cultivating a biting brand of sarcasm that he employs to devastating effect against his detractors; quiet, confident Kane, who Lily has known all her life, and thinks he’ll never look at her as a potential girlfriend. They’re all so distinctive that I haven’t needed to refer back to the book to check any details. After a day in their company, I felt like I knew all of them.

Lily tells her own story, interspersed with chapters that tell things from the point of view of the Spider, the internet stalker who’s closing in on them all like flies caught in his web. She’s a vivid narrator, with a stubborn streak of commonsense. Her lack of self-esteem makes painful reading at times, and even more painful is the bullying that makes the likes of Amy and Max easy prey to someone determined to exploit them. This sort of thing does go on, and that’s what makes it so scary.

This is without a doubt a dark, well-crafted thriller, telling a tale of vulnerability and exploitation. The dialogue is crisp, funny and, above all, firmly in character. These are very real teenagers, with very real problems.