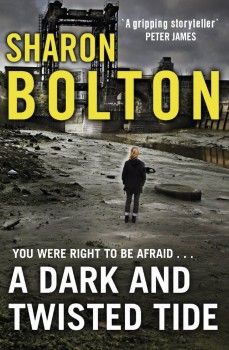 A Dark and Twisted Tide

Lacey Flint has had enough of being a detective. A transfer to the Marine Unit suits her very nicely, but trouble seems to follow Lacey around no matter where she goes, and when bodies start to turn up in her beloved river, she can’t just sit on the sidelines.

Crime fiction is littered with dysfunctional, trouble-prone main characters with a dark, disturbed past, and Lacey Flint certainly ticks all those boxes with a vengeance, but despite that she’s certainly no caricature. She’s stubborn, brave and when she gets the bit between her teeth, there’s no stopping her. But even Lacey has had enough of trouble and is determined to take a back seat for once.

She’s taken a transfer to the Marine Unit (don’t call them the River Police, whatever you do!) and given up the life of a detective, preferring to spend her time on the water, living in a houseboat and patrolling the capital’s main waterway. In fact she likes the river that once nearly killed her so much that she’s even prepared to break the bylaws and go swimming in the tidal stretch of the Thames, something that would get her in trouble with her employers if it became known.

So when Lacey comes across a body in the water, she needs the help of a friend to cover up how she came across it. But, unknown to Lacey, her bosses know her too well, and she’s not actually fooling anyone. The body of a woman has been wrapped in some sort of shroud, but has been in the water too long for a cause of death to be easily determined. When more bodies wrapped the same way start to turn up, Lacey is determined to uncover the link between the women. Her former boss, Dana Tulloch, feels the same way.

Sharon Bolton (previously writing as S J Bolton) makes her characters the strongest part of the book. Lacey is a tangled mass of contradictions, running from her past but unable to let it go. Dana Tulloch is a delight, especially the scenes in the fertility clinic with her partner, Helen, when Dana is so sure that they’re about to be turned down that she remains totally oblivious to the fact that they’ve actually been accepted.

Even when telling the story from multiple (clearly marked) points of view, each of the women remains distinctive, something that I find many authors fall down on. And Bolton’s equally at home writing men. Lacey’s colleagues in the Marine Unit, as well as the men she used to work in the Met, are all introduced with enough of an eye for detail to bring them all to life. DI Mark Joesbury, Lacey’s love interest, is a classic attractive bad boy but again, Bolton stays well away from any stereotyping. In A Dark and Twisted Tide, Joesbury is mostly off-stage as fears mount that he’s spent too long as an undercover cop and has finally stepped over the line and turned rogue. Lacey doesn’t know what she believes, but the fact that Dana Tullock, Joesbury’s best friend, believes he’s gone to the dark side, doesn’t do much for her confidence in him.

The waterways of London, from its hidden, mostly forgotten, rivers, to the claustrophobic storm sewers and the wide, dangerous currents and tides of the Thames itself are evocatively described, making me, a wild swimmer, want to get more closely acquainted with them, despite the rather stomach-curdling descriptions of some of the river’s wildlife and their habits. In many ways, the river itself is one of the strongest characters in the book, even though it has some stiff competition.

The plot moves along at the same rapid as an outgoing tide, with all strands finally drawing together in a dark and unexpected climax. My only criticism is the habit in the early stages of jumping back and forwards in time. This makes for some confusion, despite each chapter being given a day, a date and the detail of when it took place in relation to the rest of the narrative, but unless I’m taking notes, frankly, that sort of thing isn’t really much help. But that didn’t mar my enjoyment of a thoroughly engrossing – and informative – read.