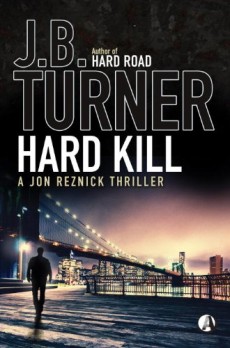 When an American diplomat goes missing, ex-Special Forces soldier Jon Reznick is asked to join the team charged with finding him.

Hard Road, J B Turner’s first book featuring ex-Special Forces operative Jon Reznick, was a great action-adventure romp, so when Hard Kill landed on my mat, I was hoping for much of the same, and I wasn’t disappointed, especially as I’d also been hoping for more of FBI assistant director Martha Meyerstein.

A senior American diplomat, Dennis O’Grady, has gone missing, and Meyerstein is heading the team charged with tracking him down. She wants Reznick on board, a move that certainly isn’t universally popular, as he’s seen as a maverick, someone who’s prepared to cross the line – usually at high speed – should the situation warrant it. All the evidence starts to point to an Islamic terrorist connection, but Reznick, thinking outside the box as usual, isn’t so sure. He wants to dig further into the life of seemingly squeaky-clean doctor, Adam Kendrick, a man who just seems too good to be true.

When all their initial investigations into Kendrick draw a blank, Meyerstein is under pressure to chase more obvious leads, but Reznick still isn’t convinced. As pressure mounts, Meyerstein has some hard decisions to take and lines start to be crossed again. Then both Meyerstein and her team start to come under attack. Someone very definitely doesn’t want this investigation to get close to the truth.

Turner writes a very convincing thriller and Reznick makes an equally convincing central character who always stays on the right side of the believability line. He’s smart, tough and unconventional. Turner can also write convincing women, something that not every male thriller writer can boast. I commented favourably on his portrayal of Meyerstein in Hard Road and Turner skilfully builds on his earlier portrayal when we see her here under even more pressure than before.

There’s a great sense of mounting tension here as it becomes clear just how far some people are prepared to go to keep their country safe. There are plenty of people around who believe the end justifies the means, and Turner’s portrayal of them is chilling and effective. Hard Kill is fast, clever and above all, believable.