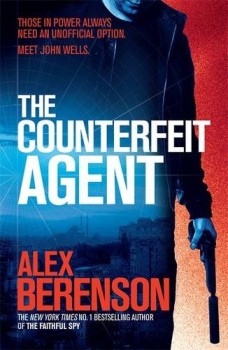 The CIA deputy head of the Istanbul Station receives information from a mysterious man who claims to belong to the Iranian Revolutionary Guard that two Israeli embassies are to be attacked. When the attack is followed by a prediction that a station chief is to be assassinated it has to be taken very seriously.

This is the eighth outing for Alex Berenson’s CIA agent, John Wells. There is, however, one major difference, which is that he is no longer in the CIA. Nor is his former chief, Vinny Duto, who, correctly diagnosing that he was persona non grata with the newly elected President, had run a successful campaign for the Senate. Well’s former immediate boss, Ellis Shafer, remains in the organisation but has been sidelined by the new chief and has little direct influence.

There is a prologue to the book, set in Johannesburg, in which a mysterious young woman named Salome is meeting an elderly white South African with a view to buying something. It turns out that the object in question is 1.3 kilos of highly-enriched uranium. We are told that this HEU is what she needs to complete her plans. Her team is in place and the operation can now go ahead. We are not told what the operation is to be.

Brian Taylor is CIA deputy chief of station for Istanbul, the chief being Martha Hunt, a woman whom he considers out of his league, although that doesn’t prevent him being attracted to her. When he receives an invitation from a man calling himself Reza and claiming to be a member of the Iranian Revolutionary Guard, Martha is not enthusiastic about a meeting between the two.

However, it goes ahead and Taylor is informed that two Israeli embassies, one in Africa and one in Asia, are to be attacked. He passes this information to Langley and, shortly after, attacks are made on the Israeli embassies in Luanda and Bangkok. When, at a second meeting, Reza tells him that a CIA chief of station, at an undisclosed location, is to be assassinated the powers that be know that the threat has to be taken seriously, particularly since Duto has himself received the same information from an entirely separate source. Again, there is no indication of where the assassination is to take place.

Duto, Shafer and Wells discuss the situation and when it appears that the CIA hierarchy are reluctant to do anything, Wells is persuaded to take unofficial action – something he does reluctantly because his partner, Anna, is insisting that he give up any thoughts of continuing his CIA career.

Berenson describes in detail the search for the originators of this information, a search which takes Wells to different parts of the globe, without his ever being fully aware of the reasons behind the attacks. What is particularly convincing about the plot as it involves Wells in particular is that he tends to underestimate his enemy and is inclined to act impatiently in his desire to get the job done. This leads him into situations of considerable danger, his escapes from which provide a very exciting narrative. The pace of the novel increases rapidly as he comes into direct contact with the conspirators and the final confrontation between him and them is totally gripping. The only small criticism, perhaps, is that some of the violence is described in rather too much detail, particularly the episode involving Wells’s two jailers.

In some respects this is not an easy book to read. Not only does it frequently move back and forward in time, but it is also not always immediately obvious to the reader that the time change has occurred, and some backtracking is required on occasions. With that caveat, the plot is extremely well constructed and more and more pieces fall into place as it progresses.

However, it ought, perhaps, to be said that not everything is clear when the ending comes. It seems that the intention was always to continue the story in another book –a conclusion that is reinforced by Duto’s saying that they have 12 days to avoid a possible war. If Berenson does decide to tell us what happens in those 12 days the account should be worth reading.