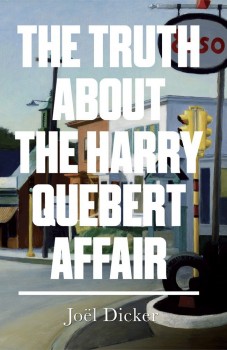 The Truth About The Harry Quebert Affair

Best-selling young author Marcus Goldman turns to his former professor to overcome a bad case of writer’s block only to discover that his mentor has been hiding an affair with a 15-year-old girl for more than 30 years. When the girl’s remains are found, Goldman, with the help of a determined detective, sets out to investigate.

This massive blockbuster has been translated into more than 30 languages, won major awards in France and with a sale of two million in Europe, now makes its English debut. Behind all the critical adulation and comparisons to Stieg Larsson and Philip Roth, reader opinion seems to be split over whether this is a great character-driven crime story or a load of pretentious tosh.

Make no mistake. This novel within a novel, within a novel, is hard work for the reader. Part noir, part unachievable love story, part coming of age saga and part critique of the art of authorship, it will demand nothing less than your full attention.

Marcus Goldman is a young author with the world at his feet after a hugely successful debut. His agent and publisher demanding a follow-up, but Goldman has writer’s block so badly he cannot even start it. Desperately seeking advice, he contacts his mentor and friend, the respected author and professor Harry Quebert who invites him to his beachside house in a small New Hampshire town.

Goldman discovers that more than 30 years before, Quebert was romantically involved with a 15-year-old girl who disappeared – and whose return Quebert has never stopped waiting for. When her skeleton is found buried in Quebert’s front yard, he is arrested for murder. Goldman tries to aid his friend and begins to investigate what really happened, only for that investigation to become his latest book.

This device allows Joël Dicker to switch between various narrators and use flashbacks to keep his story on track. In a small town there are a limited number of suspects – all apparently with viable motives – and a series of twists and turns that surprise you right to the end.

Most elusive of all is the girl herself. Labelled by Goldman’s pushy and acquisitive publisher – a masterly portrayal – as ‘the girl who touched the heart of America’, she switches from sweet schoolchild who bewitched and inspired Quebert to his greatest work, to teenage slut, but things are not as straightforward as that.

Once I got the measure of this enjoyable, intelligent and cleverly-written mystery with its fascinating cast of characters – most are true-to-life knockouts although Goldman’s very Jewish mother reads a little bit like a Maureen Lipman sketch – I could hardly put it down.

I’ll come off the fence. From the pen of a 28-year-old with four previous failures in his literary record, this is an absolute masterpiece. If you want action, violence and sex, forget it. If you want a read which stretches your emotions and your imagination and can set aside a weekend to immerse yourself in the sad and lonely world of Harry Quebert, this story, brilliantly translated from the original French by Sam Taylor, will leave you wondering why Dicker has not been recognised before.

And if you can guess the ending, the drinks are on me! My only question is has the author now painted himself into Goldman’s corner? How does he follow this magnificent and superbly moving and enjoyable tale?