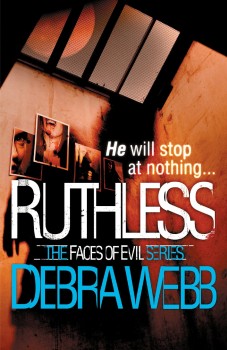 Deputy police chief Jess Harris continues her pursuit of serial killer Eric ‘The Player’ Spears who continues to haunt her life. But her task is complicated when someone starts sending her the exhumed bodies of girl children killed years before.

A crime novel, in fact any novel, requires suspension of a certain amount of belief on behalf of the reader, but this can only go so far. If that suspension is pushed too hard, no matter how clever the plot, how sensational the action, the book fails to satisfy. And that is the problem with Debra Webb’s sixth in her Faces Of Evil series – there’s all too much of it to be even vaguely credible.

Writers seem obsessed with serial killers, so deputy chief of police Jess Harris has to try to deal with two at the same time. And neither are your common or garden serial maniacs. One abducted and killed a little girl every year for 20 years before his crimes suddenly stopped. Thirteen years later he has resurfaced, but instead of killing, he is sending Jess the exhumed bodies of his victims with a series of clues to his identity. The other is her nemesis, Eric ‘The Player’ Spears, the faceless torturer and killer of young women, who haunts Jess with messages declaring his warped love.

Spears, a Svengali of multiple death, is able to obtain Jess’ cell phone number – and those of her boyfriend and colleagues – and track down the ‘Man in the Moon’ killer without ever being traced. He also appears to have his own fan club of followers. He’s also killed two FBI agents – a fact which should have launched a massive task force involving everyone except the Navy SEALs!

Everyday life in Birmingham, Alabama? And for all the attention the setting gets, its might just as well be Birmingham, England, which is all a great shame, because the feisty Harris is far too good a character to be lost in this dross. She’s the believable heart of this story. Her relationship with her on-off lover and boss is frankly more interesting than either of the investigations and her dilemma in discovering that at 40 she may be pregnant is well handled. Her staff, too, are strongly drawn, although I fail to see the need for such graphic descriptions of their sex lives.

Webb has written around a hundred novels and features on the US best sellers lists, but I got the impression she is now just joining the dots and relying on sensation rather than invention. If your plane has been cancelled and you face hours of waiting, this is an enjoyable piece of hokum that will relieve the boredom. But if you’re a real crime buff, looking for motive, clever plotting, brilliant writing and, above all, a convincing story, give it a miss. Jess Harris deserves better.