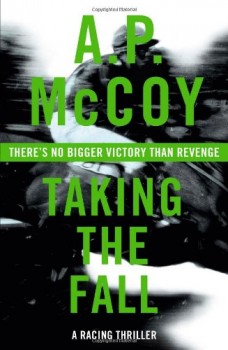 Up and coming young jockey Duncan Claymore wants revenge on the men who ruined his father’s life and now he’s in a position to get it.

After a succession of achievements, including winning the jump jockeys title a record 18 times, AP McCoy has now turned his hand to writing, following in the footsteps of Dick Francis and John Francome and courting the inevitable comparisons.

For reasons that I can’t quite fathom, Taking the Fall is set in the late 1970s, although apart from the lack of mobile phones and the activities of the Provisional IRA, there’s very little detail to ground the book in its period, and it’s easy to forget that the events are meant to be happening over 40 years ago.

Duncan Claymore is an up and coming young jockey, determined to reach the top of his profession, but he’s not going to do that unless he can learn to keep his big mouth shut. Duncan’s problem is that he has zero tact and diplomacy and, coupled with a spectacular talent for rubbing people up the wrong way, he’s his own worst enemy.

He learned about horses from his father, Charlie, a former racehorse trainer who got on the wrong side of some powerful people, who were able – and very willing – to ruin both his reputation and his career. Charlie is now in a nursing home, struggling with his heath and his memory, and Duncan wants revenge on the men who took his father down. When he ends up in a position to hit back, Duncan puts his mind to getting even with them, pitting himself against men with far more money and clout than he’s got.

Taking the Fall doesn’t exactly leap away from the starting gate. The introduction to Duncan as a young jockey is interspersed with numerous flashbacks to his childhood and to the events that ended up being the ruin of his father. There’s a tendency here to get bogged down in the past with the constant jumping backwards and forwards, and the net effect is that very little progress seems to be made.

But for me, the main problem with the book is Duncan himself. To put it bluntly, he’s an immensely dislikeable character. He hops into bed – and onto billiard tables – with various women, using them as pawns in his plans for revenge, and at the same time providing a thin excuse for a liberal smattering of sex scenes presumably intended to make McCoy’s book seem racier than his rivals. But, in reality, these added absolutely nothing to the story. All that happened was I ended up trying to get my head around how it was possible to do what was being described in the front seat of a Lamborghini!