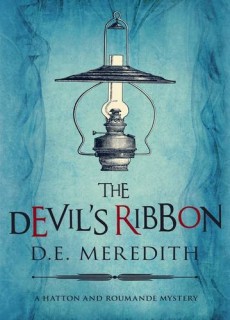 Underfunded Victorian forensic scientist Professor Adolphus Hatton and his assistant Albert Roumande are battling to identify the cause of a cholera outbreak. At the same time they must deal with a series of apparently politically motivated brutal murders all connected to an isolated Irish village.

This clever, often brilliant, story will stay with you, thanks to the extraordinary atmosphere DE Meredith so effortlessly generates. It’s no CSI Victorian style and her pitiless attention to detail, as the early days of forensic medicine are brought to horrific life, are not for the squeamish.
The descriptions of the primitive mortuary at St Bartholomew’s hospital and developing methods of dissection and analysis make a fascinating contrast with contemporary and often over-dramatised stories of forensic pathologists.

This dark, creepy, but always entertaining read, is full of interesting ideas, well-turned phrases, and vivid images. It ombines classic storytelling with a well-executed historical background featuring one of the pivotal moments in British history – and one which was to have continuing consequences for the next hundred years.

Meredith’s debut with Devoured was a fine introduction to scientist Professor Adolphus Hatton and his assistant, the Frenchman Albert Roumande. In this second novel, set amid a cholera outbreak in the slums of an unseasonally steamy and diseased London, they must also face a series of brutal murders.

With the Irish nationalist movement growing among London’s factories and slums with huge numbers of refugees – all blaming the English for their plight – packed into ‘rookeries’ in the poorest parts of the city in the aftermath of the Potato Famine, the potential for violence is never far away.

The killings all appear to be political – and linked to one Irish village. Revenge is an obvious motive – but for what? And what role do the Ribbonmen, forerunners of the IRA, have in this?

Hatton and Roumande are forensic pioneers armed with the latest techniques including fingerprinting – and have both method and knowledge to put the pieces together. But the intellectual detachment of science is more goal than reality as they wade through horrific reality.

There are complications. Their confident relationship is offset by their dislike and suspicion of the dandy Welsh Inspector Grey and his brutal Italian ‘valet’.

The fiercely ambitious Grey, with his eye-catching wardrobe and sometimes surprisingly sophisticated tastes, who believes that truth should never interfere with getting a conviction, is hardly your run of the mill Victorian detective.

And there is also Sorcha McCarthy, the beautiful young widow of a murdered Unionist politician, whose dark and classic Irish looks add urgency to Hatton’s quest and remind him of an earlier episode in his life.

This deeply atmospheric novel is rich in detail. Science mixes effectively with harrowing accounts of Ireland and violent unrest in London. It’s a fascinating blend which should establish Meredith and her forensic heroes as a team to watch.