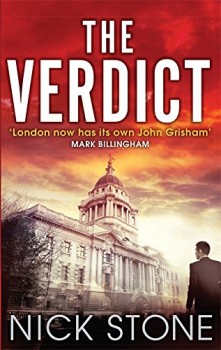 When legal clerk Terry Flynt is assigned to a murder where the accused messed up his life, he needs to decide what outcome he is seeking.

After a promising start at Cambridge University, Terry Flynt left under a cloud and has spent 20 years in menial work, only recently hired as a clerk at top London legal firm KRP. By apparent chance he is assigned to the case when a commercial client, hedge-fund manager Vernon James, is accused of the murder of a woman in a hotel room.

Terry and VJ have a history: they grew up together and were close, but Terry blames VJ for his expulsion from Cambridge, and grew to hate him when VJ married his former girlfriend and became rich and successful. To consolidate his position at KRP and support his family, Terry needs to dig up some exculpatory evidence, but his instincts are telling him VJ is guilty and deserves the penalty that will come with conviction in court.

This is a very readable legal thriller, with slow disclosure of the activities of several Machiavellian characters including Kopf, the head (what else) of KRP, Swayne, an investigator who seems too well informed, the Silver Service Agency and their sinister team of operatives, and the powerful Nagle family. The reader looks over Terry’s shoulder as details emerge, but Terry’s own backstory is something which is also drip-fed to the reader.

The combination of Terry’s ambivalence about VJ, uncertainty about VJ’s culpability and about the real explanation for events make for exciting reading. We get some police procedure, some pretence of the same from Terry and Swayne, and some excellent court action from the Old Bailey. There are plenty of twists and turns to sustain interest.

Unfortunately, Stone paces plot developments and generates tension by allowing important aspects of VJ’s defence to be overlooked by both the police and by defence lawyers for longer periods than is really plausible. When the murdered woman is shown to have had a relationship with another man, and exchanged phone calls on the very night of the murder, neither police nor defence seem interested. VJ’s contention that he was set up seems again not to have occurred to anyone for a very long time, despite several very odd aspects to the police case.

The tendency to over-dramatise supposed moral transgressions is also a little irritating. VJ and his business manager are ‘bastards’ for offering a large sum to induce the Quakers to sell a piece of land which may then be left vacant in anticipation of a rise in value. To prepare a witness for cross-examination by reference to anticipated questions from the prosecution was a ‘gross violation of ethics.’

Extraction of the maximum drama from a story is part of the skill of an author, but the means should not be too evident. Stone takes rather too many liberties with the plot and his characters to make The Verdict entirely credible. However, providing the reader is prepared to exercise a little suspension of disbelief, there is plenty to like.