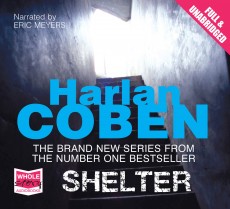 When a girl at Mickey Bolitar’s school goes missing, he teams up with an unlikely group of friends to track her down.

Everyone’s doing it these days, and by that I mean dabbling in books for young adults. Amongst others, Kathy Reichs has a spin-off from her Temperance Brennan series in a mix of thriller and urban fantasy; John Grisham has staid young lawyer, Theodore Boone, and Harlan Coben has brought in Mickey Bolitar, the 15-year-old nephew of sports agent Myron Bolitar, the protagonist of several of Coben’s books.

I’d been rather hoping to meet a younger scion of Win’s family as well, as I’ve always had a soft spot for the distinctly psycho Windsor Horne Lockwood III, but in that respect I was disappointed. Instead, Coben serves up a collection of marginalised teens who band together to search for a girl who goes missing from their school.

Mickey Bolitar isn’t having an easy time of things. His dad’s dead, his mother’s in rehab and he’s none to pleased by having to live with his uncle Myron and attend a local school. Things start to look up when he meets Ashley, but when she vanishes without trace, he’s determined to find her, even though no one seems to know where she’s gone. He gets together with spiky, sharp Goth-girl Emma, usually known as Ema (pronounced Eema), and dorky, funny Spoon. The long-drawn out joke about her name wears thin pretty quickly, but loyal, somewhat naive Spoon’s innate charm more than makes up for that minor irritation.

There’s more than a hint of the Scooby Gang in the way Mickey and his friends go about their investigation. Coben isn’t shy of loading the story clichés such as the spooky house inhabited by a scary old woman who makes cryptic comments and raises the possibility that Mickey really doesn’t want to think too closely about, only to have his hopes dashed. There’s also a couple of stereotypical bullying jocks and a bland crop of teachers.

Nothing is quite what it seems in Shelter, and this isn’t going to be the book for you if you like all loose ends neatly tied up in one package. It ends on a massive cliffhanger, with the impact of that somewhat lessened by the fact that I was left thinking ‘that’s just not possible.’ And although the final puzzle is no doubt meant as the hook to lure the reader into the next book, it treads a fine line, and could just have easily pushed me away.

Eric Myers’ narration is appropriately laidback, much like Mickey himself, but his female voices have a tendency to sound like they’re all auditioning for a part of one of the witches in Macbeth. I think I would have preferred a more age-appropriate narrator for a story that concentrates on a group of teenagers, but that’s a minor niggle in an overall competent and engaging story. Just don’t pick this up expecting one of Coben’s adult books, Shelter is a story that needs to be taken on its own terms to work.