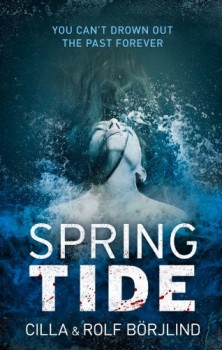 On Nordkoster beach in 1987, a young boy, hidden in the dunes, is sole witness as three men bury a heavily pregnant woman up to her neck in sand as the tide rolls in. Twenty four years later, a young police student is investigating cold cases and selects the still-unsolved beach crime for her final assignment.

On Nordkoster beach in 1987, a young boy, hidden in the dunes, is sole witness as three men bury a heavily pregnant woman up to her neck in sand as the tide rolls in. Twenty four years later, young police student Olivia Rönning is investigating cold cases and selects the still-unsolved beach crime for her final college assignment.

I must confess that the chilling start to this novel almost did not make me want to continue despite the fact that the opening scenario is extremely effective in drawing the reader in, contradictory though that may seem.  But it was this ability to hook the reader that made me continue as the story quickly switched to modern day Stockholm and a seemingly unrelated group of homeless people.

The authors’ experience as writers of TV and film screenplay adaptations of the Arne Dahl Intercrime novels and Sjöwall and Wahlöö's Martin Beck series is evident from the start as the plot unfolds carefully but visually.  As it progressed I could easily envisage it in a 9.00pm BBC4 Saturday night slot.

In the summer of 2011 there is a crime wave in Stockholm against vendors of the Swedish equivalent of The Big Issue, seemingly carried out by a gang of young men who film the attacks and then post the footage online. At the same time, police student Olivia Rönning is investigating a cold case that her late father had failed to resolve; the murder of a pregnant woman who had been drowned by the spring tide on the island of Nordkoster. Miraculously, her baby had survived.

The Björlinds manage to knit together skilfully a compelling and pacy story that involves a caravan occupied by a woman known as ‘one-eyed Vera’ as a key plot device, a down and out who is not all she seems, a triad of businessmen who hob-knob with Swedish royalty and an ‘exclusive’ escort service.

The character and plot development is sound and interesting throughout although at times, some of the secondary characters have a distinctly Martin Beck-ish air about them (I’m thinking particularly of Ovette Andersson, a down-at-heel prostitute whose 12-year-old son becomes embroiled with Stockholm gang culture in a surprising manner).

The climax took me by surprise and although some might think it cheesy or inevitable, it fitted well with the deft plotting and characterisation.  I look forward to meeting Olivia Rönning and her unconventional colleagues again in the future.

Tracy Johnson is a teacher who loves reading and lives in Bristol.