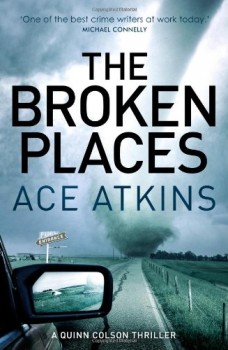 Sheriff Colson is unhappy with his sister’s liaison with an ex-convict, but things snowball when prison escapees come his way looking for money they think is owing.

Quinn Colson is a veteran of many tours of duty in Afghanistan, now returned to his home town of Jericho with fellow vet Boom. Quinn has been sheriff for a year, and is popular with the townsfolk, but is worried about his sister Caddy who is in a relationship with a new preacher in town, the reborn Jamey Dixon.

Jamey claims not to remember the incident which left a partner dead and earned him a prison sentence, for which he has been pardoned. But Quinn doubts he has truly reformed. His sincerity is soon put to the test, when a pair of escapees from Parchman’s Farm, intimates of Jamey, come his way. They believe that Jamey has expropriated the proceeds of a robbery from an armoured bank delivery truck, and mean to get their share.

The setting for this book is convincing, small town America where concerns are almost exclusively local, money is tight and opportunities limited, country music is king, and church something people take seriously. The drama is enhanced in the latter half by the tornado which hits the town, and there is a good deal of pondering about how this fits God’s plan, and so on. Urban sophisticates, at least in the UK, may find this demonstration of simple faith a little tiresome, but one supposes that it fairly represents the society typical of the region.

Unlike the society in which it is set, however, the action is lively from the start. Chapters depicting Quinn and his deputy Lillie about their normal duties, Quinn’s sex life and his concerns about Caddy, are interspersed with the story of the prison break and the progress of the villains Esau and Bones towards Jericho. The two storylines intersect with the felons’ arrival and the menace increases as it becomes clear they will stop at nothing to ensure they get their cash.

The tale is given added complexity by the introduction of Johnny Stagg, a small town organised crime boss well camouflaged behind an avuncular persona and playing a prominent role in local politics. His precise role is left murky until the final pages, but it is clear he is involved in skullduggery up to his neck, whilst being slippery enough to divert the finger of suspicion elsewhere. Corrupt relationships with various government agencies are hinted at, and will give Stagg leverage to frustrate Quinn in a sequel, no doubt.

Ace Atkins has two previous books featuring Quinn Colson and a fourth on the way. Unlike, say, Lee Child’s Jack Reacher, Quinn is a real person and bears his army credentials modestly, without any flash. The writing is nicely paced and convincing enough to make the outcome for the principals a matter of interest.