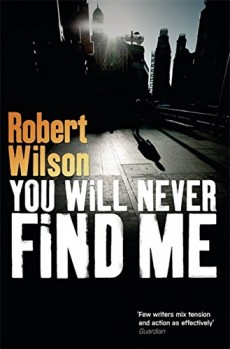 You Will Never Find Me

The headstrong teenage daughter of freelance kidnap expert Charlie Boxer and his DI former wife disappears only hours after running away to Madrid. At the same time the young son of a Russian businessman is kidnapped in London. Is there a link between the two events?

Robert Wilson is a master of his craft and this is without doubt the high-class thriller one would expect, but he does seem to be losing his focus. This second of the Boxer series lacks the impact of his earlier works set in Spain and Portugal.

After initial stories set in parts of Africa unable to cope with the twin impacts of capitalism and corruption which some readers found a touch too clever despite their undoubted brilliance, his magnificent The Blind Man of Seville was far more measured and meditative. A Small Death in Lisbon won him a string of awards and the superb Company of Strangers with its huge historical span and in-depth examination of the changing feelings of differing cultures was a writer in his prime.

This second novel set mainly in London picks up more or less where Capital Punishment left off. But somehow Charlie Boxer – ex-Army hard man, murder detective and now freelance kidnap consultant and his former wife and DI Mercy, another kidnap specialist – fail to grip the imagination.

The couple are thrown together again when their headstrong teenage daughter runs away from home and disappears only hours after arriving in Spain. Running parallel to Charlie’s hunt is the London kidnapping of the football-mad young son of a Russian businessman with a mysterious past – and links to a killing which sounds awfully like that of former KGB agent Andrei Litvinyenko.

While there are some insightful passages on the effects of loss and some well-researched work on the problems of disguising the enormous sums of money generated at the upper end of the drugs trade, these seem almost incidental to the plot.

Although the story moves along at a lively pace and with plenty of surprises, there really is nothing to draw you in as did his earlier books and an ending which can best be described as neat makes you wonder if it was all worth it. Charlie Boxer is hardly a sympathetic character and I wonder if he has enough appeal to stay the course? If you’re a fan of gritty, violent, thrillers you’ll probably love this, but I felt it lacked the sharp depths, strong plotting and clever characterisations that have come to epitomise Wilson’s best books.