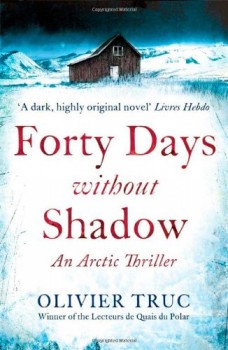 When the theft of a valued native drum and the killing of a reindeer breeder occur within a few days of each other, the Reindeer Police face more than arctic winter conditions in their efforts to secure justice.

Well above the arctic circle, where Norway, Sweden and Finland meet, sits Kautokino, in the heart of Lapland. The winters are savagely cold and for 40 days each year there is no sun. The traditional way of life for the native Sami people is reindeer breeding, a hard life even with the benefit of modern technology. Those who stick to the old ways, like local breeder Aslak, are very few and a dying breed.

Detectives Klemet Nongo and Nina Nansen constitute the reindeer patrol, normally there to provide a brake on disputes between breeders. Resources are not huge, however, and they are called in to help after a rare Sami drum is stolen from a museum shortly after its recovery from abroad, followed shortly by the murder of a breeder. Klemet’s superior, Brattsen, aggressively pushes the theory that a dispute between breeders lies behind the death.

Klemet and Nina see things differently, however, and effectively combine their resources to pursue their belief that normal boundary spats are insufficient an explanation, and that the two cases are connected. Nina is from the coast with limited experience of the area; Klemet was born locally but has unresolved issues to do with his Sami heritage and an upbringing which sought to tear him from it. The dark forces at work are gradually revealed to the reader, sufficiently in advance of their exposure by Klemet and Nina to provide plenty of tension as events move towards a climax.

The extreme environment contributes greatly to the reader’s interest: wildly beautiful and yet so marginal for the survival of living things. The action takes place on deep snow where off-road movement is limited to skis or snowmobiles during those days of January when the sun first re-appears for just a few hours each day.

The book is also very informative about the circumstances of the Sami, who historically fared badly from intrusion by southerners after mineral wealth, and until very recently faced societal attack in the same way as other minorities worldwide, abetted by the Laestadians, an extreme protestant sect.  A similar fate to that of native Americans has been delayed only because the climate is so much more difficult; in current times the protection of the Sami is a contentious political issue.

The conclusion of the book brings together two plot threads: one a tale of exploitation by both locals and outsiders in greedy combination, and the other a very personal connection between Klemet and Aslak, Sami contemporaries who have taken different paths in life. After what is a fairly lengthy book, the ending comes suddenly and without the customary rounding up, and is all the more dramatic for it.