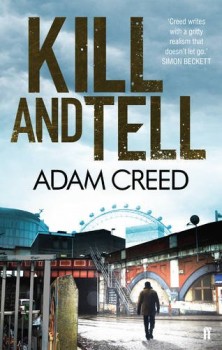 DI Will Wagstaffe is desperate to find evidence to exonerate a subordinate of the murder for which he is on remand, but the disappearance of a man with Sicilian ancestry is a distraction.

Detective Inspector Will Wagstaffe, ‘Staffe’ as he is familiarly known, is back at work while still recovering from two bullet wounds received from Golding, a member of the East London e.gang. Golding was subsequently shot and killed himself, and DS Pulford, one of Staffe’s team, is incarcerated in Pentonville on suspicion.

Pulford’s release would stir up controversy, the very last thing the upper echelons of the police and politicians want, with an election coming. But he is vulnerable to e.gang members inside, and Staffe is urgently seeking the evidence to secure Pulford’s safety. Another case has fallen into his lap, however, and he needs to be able to show progress to ensure a future in the police force.

This second case concerns Carmelo Trapani, a man who came to UK from Sicily around the time of the famous riots in Cable Street in 1936, when Jews, Communists and others tangled with the Fascist Blackshirts in London’s East End. Carmelo has since become wealthy, but has maintained close links with others from his homeland. His disappearance has the hallmarks of foul play, but it seems that he was forewarned, as he left instructions for an announcement on the distribution of his estate if he did not resurface within a week.

Kill and Tell is the fifth Staffe book, and although intelligible to a reader coming new to the series, the background to relationships, both professional and private, developed in earlier books would aid in understanding. This is especially so since the behaviour of the key characters is seemingly guided largely by instinct and feel. We hear about Staffe’s long-standing partnership with Sylvie, who notwithstanding problems wants a child with him, and his affair with Josie, another subordinate DS. At work he is in competition with Rimmer, another DI, and has an equivocal relationship with Pennington, his boss.

All this adds up to a rather unusual police procedural, with individual insights and initiatives more in evident than the direct lines of approach to crime-solving. The two crime stories are interwoven but do not intersect except insofar as they compete for Staffe’s energy. Actually it is difficult to credit that Staffe would not be on Pulford’s case full time given the latter’s vulnerability, even less that he would not be placed in isolation when on remand, nor that his mother would be left unprotected.

The present tense is used throughout, which as ever tends to position the reader close to the action. The drama of the confrontations – Pulford with e.gang members and Josie with members of the London underclass – are thus enhanced and are pretty raw. Kill and Tell will particularly appeal to those who find the London crime community an interesting field.