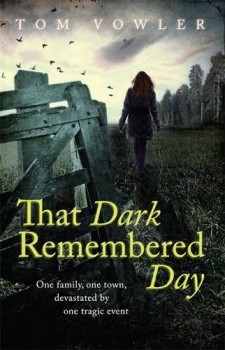 When Stephen is told his mother isn’t well, he knows he has to face up to his past and return to the village where he grew up, but he dreads going back. The past is something he simply doesn’t want to have to deal with, but that isn’t an option any more.

Tom Vowler’s debut, What Lies Within, was a strong and assured story, set amidst the forbidding landscape of Dartmoor. My only criticism then was that Vowler’s language had a slight tendency to descend into purple prose, but here, in That Dark Remembered Day, he eschews an excess of description in favour of taut, dark, but always well-drawn pen portraits of people, places and events.

He follows the same framework, though, interweaving the past and the present into a seamless whole, this time without adopting devices such as alternating tenses to differentiate between past and present. Here, a simple heading to each section and chapter is all that’s needed to ground you in the right time. The book is spare, almost under-written at times, and is all the better for that. Vowler lets darkness speak for itself, without the need to find a wide range of words to describe its blackness.

Stephen is happy in his job as a university technician until, in an unaccountable fit of anger, he does something that results in his suspension from work, driving a wedge between him and his wife, a lecturer at the same university. As a result, while he’s awaiting a disciplinary hearing, Stephen has time on his hands to visit his elderly mother when he’s told she’s not very well. But seeing her means returning to the village where he spent his childhood, a village that Stephen has avoided for a very long time, for a very good reason, despite the fact that his mother chose to remain there.

It’s clear that a dark shadow hangs over Stephen’s childhood but Vowler skirts the past very circumspectly for most of the book. There are no information dumps, just a gradual move towards the events of the past as the details of Stephen’s childhood and his relationship with his parents gradually emerge, and it becomes clear that the rural idyll they’d tried to establish deep in the heart of the West Country turned out to be anything but roses around the door. It’s enough to know that something bad has happened.

I will confess to some slight frustration at times when every time the day in question came close to being discussed, the narrative veered away in a different direction, but after a while, I was too caught up in Stephen’s story to care that no explanations had been forthcoming, and I learned to trust that all would become clear if I only had the patience to wait and trust the author.

In a world where soldiers return nearly every day from the long war of attrition still being waged in Afghanistan, damaged in both mind and body, the battle for the Falkland Islands that is central to much of the book perhaps resonates more now than it has done for some while. Vowler is on strong ground here, managing to convey the horrors of that conflict without ever turning it into a history lesson.

This is a story of how past events resonate down the years and how, as my father used to say, things ‘don’t improve with keeping.’ The impact of war on those involved is conveyed sensitively, whilst remaining harrowing. This is a dark story, but one not without hope, although I think your reaction to the ending will depend very much on whether you are a glass half-empty, or glass half-full person.