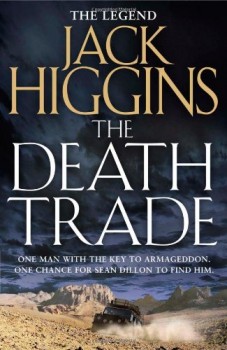 Sean Dillon, former IRA enforcer-turned-member of the security service, has to find a way of getting to a Iranian nuclear scientist before al-Qaeda do.

With over 60 books to his name, I seem to have been reading Jack Higgins books most of my life. Even after 40 years, I can still recall the names of some of the characters together with the plot of his classic A Prayer for the Dying set amidst the troubles of Northern Ireland.

Despite the enormous strength of his wartime stories, starting with The Eagle Has Landed, Higgins has always seemed most at home when dealing with Ireland and the Irish, so it’s probably no surprise that he keeps coming back to former IRA enforcer, Sean Dillon, who’s featured in 20 of Higgins’ books.

The Death Trade sees Dillon back in action as part of the black ops unit run by General Ferguson, known as the Prime Minister’s private army. They operate very definitely on the shady side of the street, with their own clean-up crew, including an ‘ask no questions’ undertaker, on 24 hour call.

Dillon is teamed up as usual with the decorated Afghan war hero Captain Sara Gideon, heir to a Jewish banking fortune; technical expert, Major Giles Roper, the wheelchair-bound version of Q; and ex-gangland criminal Billy Salter. This time they are dealing with the very real possibility that Iran is about to be armed with a nuclear bomb of devastating power, courtesy of the research being carried out by an old friend of Sara Gideon’s family, a scientist who is about to be awarded the Legion of Honour. They need to get to Simon Husseini before al-Qaeda does.

As ever with a Jack Higgins book, the plot moves along at a fair clip, the action scenes are short, sharp shocks and despite the fact that this is a long-running series, he still manages to achieve a sense of danger, as readers who’ve been with him a while will know that he can, and does, kill off his darlings. That feeling is heightened by the fact that even Dillon, now in his 50s, seems to be ageing, and for once he doesn’t come out of the action unscathed.

The use of a third person point of view in a style that leans heavily towards omniscient narrator tends to rather skate over the top of the characters rather than embedding you for any length of time in the head of any particular person, but despite that, Higgins still excels at bringing his characters to life. I was very taken with the half-Bedouin, half-Irish Declan Rashid, a colonel in the Iranian army, as was Sara Gideon. He also does a cracking job of keeping you guessing who are the good guys and who are the baddies. I made a couple of guesses, and was wrong each time.

If you know and love Jack Higgins, you’ll find The Death Trade a great addition to his series, and if you don’t know him or Sean Dillon, this is as good a place as any to start, even though it is a long way into the series.